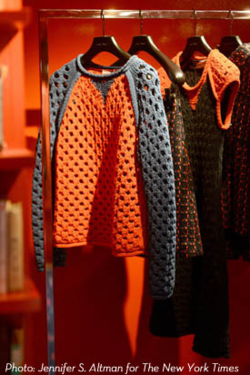 It's been a few weeks since The Shophound has caught up with the Critical Shopper over at the Thursday Styles. This week, it is Molly Young's turn to take on the city's newest boutiques, and she has made her way to the new Sonia Rykiel boutique on Madison Avenue. Hey, we were there too when it opened just about a month ago, so we are very well familiarized with the store's unique red lacquered bookshop aesthetic which our shopper describes as "eye-catching in a way that makes passers-by halt, whip off their sunglasses and peer inside"
And that's half the game right?
While The Shophound was more taken with the store's design and décor, Our shopper hones in on the clothes, having reportedly just over purged her closet. Here is where we learn that Sonia Rykiel, though always a label steeped in a woman's point of view from its flame-haired founder to its current designer Julie de Libran, is perhaps not for every woman. Of a rainbow striped jacket she concludes, "On a taller person, the fit would have been slouchy. I looked like a garden gnome." But we were most surprised by the critique of a pleated dress in 'creamsicle' polyester for $2,190, "it should have been chiffon, at that price". Well, Molly, chiffon and polyester are not mutually exclusive. Chiffon is a particular weave of fabric, like satin or corduroy or gabardine. Polyester is a fiber out of which you can make that fabric and many others —but we knew what you meant. Your copy editor didn't, though.