Pratesi vs. Frette This Week plus Opening Ceremony's Big Event Returns To Williamsburg

Zegna Will Take Its Flagship To The Crown Building 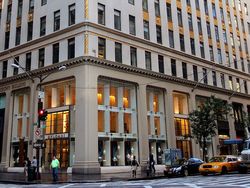 It was only about eight years ago that Ermenegildo Zegna debuted a lavish Fifth Avenue flagship store of the sort that one would expect it would remain in for quite a while, but the NY Post is reporting that the Italian menswear megabrand is already heading to The Crown Building at 57th Street and Fifth Avenue to open a new 9,000 square feet for a new brand palace at one of the most expensive intersections in the world. If, as one might presume, the company had a 10-year lease at 663 Fifth Avenue, its current home, then it should be ready to move uptown at about the time its current lease runs out. While the retail space is being reconfigured, much of the office space upstairs will be converted into a combination of luxury hotel and condominiums.
Zegna's space is reported to include 1,500 square feet the ground floor and 7,500 square feet on the second floors of the building with an entrance on West 57th Street. Bulgari, the longtime corner tenant, has recently renegotiated its lease for a reduced 3,000 square footprint. It looks like Zegna will take over part of Bulgari's former space combined with Smythson's former store next door at the street level. What the new store will look like will be for us to anticipate, but given the splashy address and its current glamorous digs, it seems fair to expect a major statement.