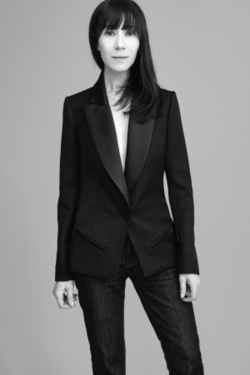 As has been widely rumored, Paris based designer Bouchra Jarrar (pictured at right) has been named artistic director of women’s collections at Lanvin starting this Monday. Jarrar replaces Alber Elbaz whose departure last year stunned fans and customers and left his design staff not only heartbroken, but litigious, taking the storied house and its owner to court to protest the designers ouster. The first collection without Elbaz, shown last week, elicited scathing reviews, indicating that leaving the design direction to Elbaz's remaining staff was not a viable 'place holder' option for even one more season as has been done at houses like Dior which is currently between creative directors. For her part, Jarrar is a well-liked choice who seems qualified to help push Lanvin beyond the controversy of Elbaz's departure and reassure nervous retailers who have invested in the label and built loyal customer followings. After stints at Jean-Paul Gaultier, Balenciaga under both Josephus Thimister and Nicolas Ghesquiere, Jean-Louis Scherrer and Christian Lacroix, Jarrar started her own house in 2010 and has shown both ready-to-wear and haute couture collections as an official member of the Chamber Syndicale de la Haute Couture. It has not been confirmed that she will continue on with her own label as she concurrently designs for Lanvin, however she is reported to have taken on minority investment for it as recently as last year. Her own company is relatively small compared to Lanvin, however, and she will presumably have to contend with the same challenges that faced Elbaz and led to the conflict that ended in his dismissal, namely the lack of company owned stores to even out the brand's balance between wholesale and retail as well as the widely reported lack of funding that has hindered Lanvin's ability to compete with bigger labels in the most profitable handbag and accessory categories. She will, however, be able to restore some good will for the brand and confidence that it will not fall back into the obscurity from whence it emerged when Elbaz became its creative director. “Joining Lanvin satisfies my desire to create and express myself in a space of larger expression,” she says as part of today's announcement, and all eyes will be on her when she shows her first collection this fall for Spring 2017.