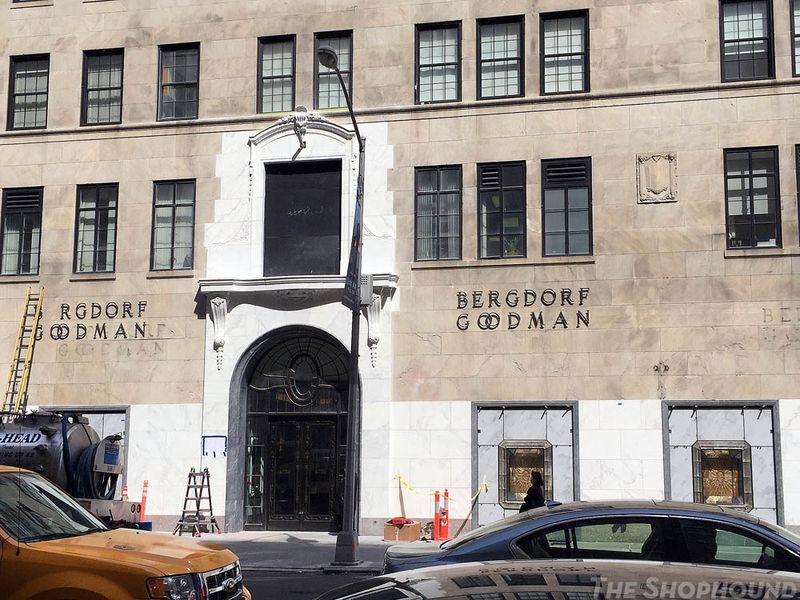 We have been actively following the progress of Bergdorf Goodman's current exterior renovations partly because we are interested and partly because we happen to have walked by the place a lot in the past few weeks. Today, we noticed that the last remnants of the plywood covering has been removed from

Click image for a larger view in a new window

the newly remodeled 57th Street side of the store including a new entrance into the store's re-conceived jewelry salon. The store has faithfully replicated the 58th Street (pictured at left) entrance on the other side of the store to create a grander entryway (pictured above in the best shot we could get over Midtown traffic). While the 58th Street door is technically the store's front entrance dating back to the building's completion in the late 1920s, more customers tend to enter through the more heavily trafficked 57th Street and Fifth Avenue doors, so it makes practical sense to upgrade the entryway. Despite the completed construction being exposed, it is clearly not totally finished and ready for its close-up just yet. The wrought iron railing at the window above the door and new awnings over the reconfigured windows have yet to be installed, but what has been revealed seems to answer one questions. The new, pristine white marble visible between the windows and on the new entryway appears not to be decorative, but a practical measure. We now can safely presume that the new stone will ultimately be toned to match the color of the building's original facing to create a seamless effect once the finishing touches are applied. As we have noted before, how all of this remodeling will affect the building's chances at being named a City Landmark remains to be seen, but by the end of this year, by which time a final designation is expected to be made, the building will look substantially different from when it was initially proposed for Landmark status.

Previously:
Extended Transformation: Bergdorf Goodman's 58th Street Side Is Getting Redesigned, Too