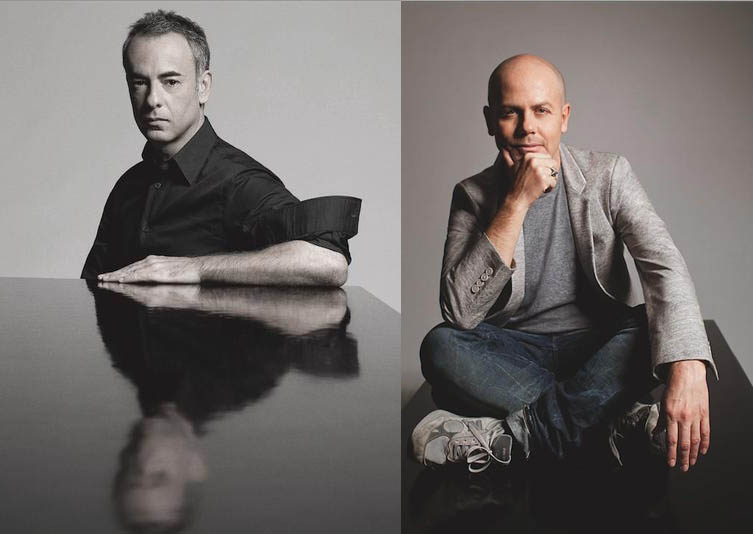 Perhaps his own women's line is not what Raf Simons has in the works after all. Maybe he's heading Stateside.
The revolving door of Europe's biggest designer brands has opened in New York today as the exits of both Francisco Costa and Italo Zucchelli (pictured left and right above), creative directors at Calvin Klein Collection for women and men respectively, have been announced. The company has indicated that all Calvin Klein products will be unified under a single creative director yet to be disclosed, while fashion insiders filled in the blank with Raf Simons' name, a rumor that has apparently been percolating recently. The new creative head will be announced "in due course” according to the company, which is in keeping with the belief that a non-compete clause in Raf Simons' former contract with Dior is delaying the completion of any transition until this summer.
While both Costa and Zucchelli have been credited with maintaining the fashion authority of the Calvin Klein brand after its purchase by PVH and the retirement of it's namesake, commercially, the Calvin Klein Collection business plummeted after Klein's retirement as the company turned its attention toward the newly introduced Calvin Klein White Label moderate line for profits and growth. The Collection lines remained beloved by the press, and Costa was a recipient of the CFDA award. The runway collections gained some traction in recent seasons as the parent company increased support for the neglected lines. Zucchelli's menswear has been embraced by avant-garde retailers like Opening Ceremony and Dover Street Market, and Costa's womenswear has found its way back into Bergdorf Goodman, but not all the way back to the prized, spacious in-store shop overlooking the Plaza  it commanded in its heyday through the 1990s. While Costa has had great success with red carpet dressing, he often dressed his stars in simpler gowns that recalled classic Calvin Klein styles like the sleek red tank gown Jennifer Lawrence wore at her first Oscar ceremony rather than his own more complex runway designs, causing a stylistic disconnect for the collection.
As for Simons, his success at the modernistic Jil Sander as well as his own influential men's label and balancing of ornate and minimalist looks at Dior make him a perfect choice to lead Calvin Klein —if it's true.
We will all have to wait a few months to find out for sure, but the prospect of a Simons led Calvin Klein is a promising idea for one of New York's greatest designer brands.