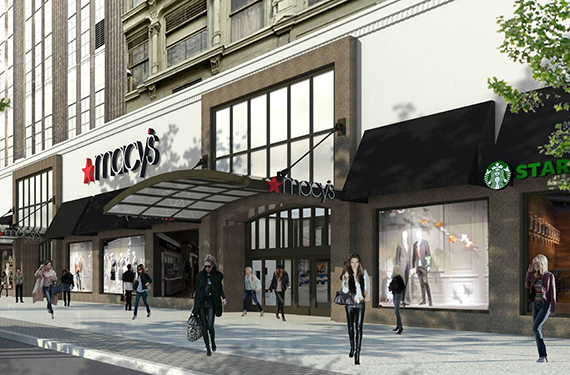 A few renderings have appeared for the radical $100 million renovation currently underway at the long neglected Fulton Street Macy's store in Brooklyn.
The former A&S flagship had been essentially left to languish in creeping decrepitude until on-and-off plans for a refurbishment were announced around the same time that dramatic renovations were fully unveiled at the mammoth Macy's Herald Square store. Finally, a scheme was revealed to shrink the Brooklyn store to a still sizable five selling floors including the basement and to turn the upper floors into office space. A glimpse of what this will look like is now out there. The renovation is being undertaken by FRCH Design Worldwide and includes new steel and glass awnings over the entrances on Fulton Street outside (pictured above) and a more extensive redesign on the inside. As at Herald Square, old, dingy ecru-colored walls will be transformed to sleek optic white, presumably with modernized lighting to create a brighter interior with HD video screens lining a refreshed escalator atrium (below). It's hard to tell which floor we are looking at in the rendering or how much, if any, of the remaining historic art-deco detailing of the main floor will be preserved, including a lavish elevator bay in the center of the main floor that may just hold more elevators than the newly reconfigured store will need. Last time we passed through, renovations were well underway, and however it turns out, it can only be an improvement for the store which in recent years has found itself in the backyard of some of Brooklyn's increasingly affluent neighborhoods. Eventually, it will be in a position to better serve those potential customers, and help continue to upgrade the Fulton Street shopping corridor. 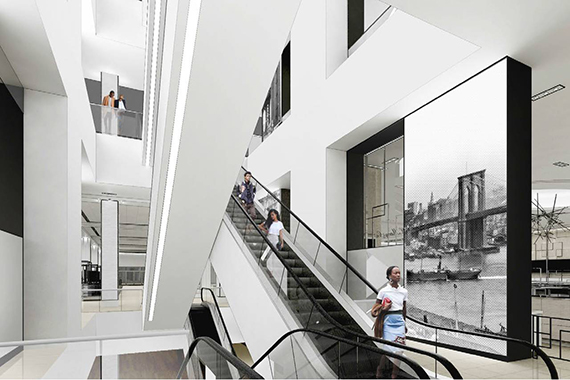