H&M Captures Kenzo For Its Next Collaboration

Is Under Armour Fighting Nike And Apple For Space In The GM Building? 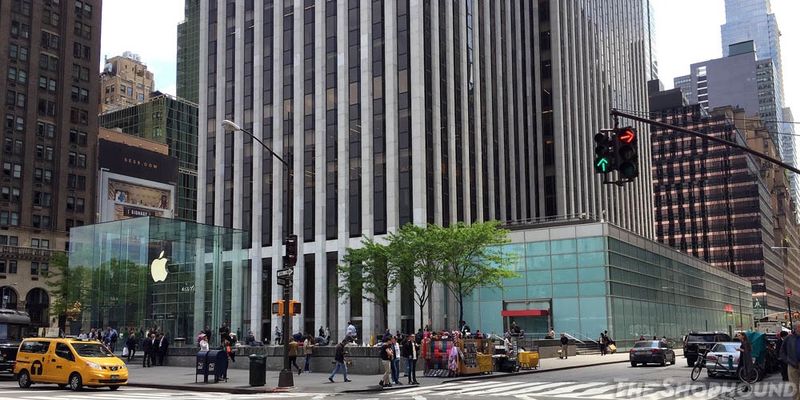 Why, just last week we wrote about the potential battle between Apple and Nike for the former FAO Schwarz space on the 58th Street side of the GM Building (pictured above), and now the status quo has changed as another player, Under Armour, appears to have entered the fray. According to Crain's, the burgeoning performance athletic-wear company is in talks to take over at least part of the space that the legendary toy store has left vacant. Does that mean that Under Armour will now be nestled among Cartier, Apple and Bergdorf Goodman's Men's store which will be its neighbor across the street?
Reports say that the former toy palace with 13,ooo square feet on the ground floor and 40,000 on the second level is ultimately likely to be divided, and we don't know if Under Armour may be in talks for the whole thing or part of it, though if Nike is still looking to get into the space after its lease extension on 57th Street expires, it is unlikely that it would accept Under Armour as a direct adjacency.
Cartier's store on the 59th street side of the GM Building is technically temporary, and though there has been talk of the jewelry company holding on to it even after it's landmarked townhouse on Fifth Avenue is finally restored and renovated, it could also be in play within the next year or two.
The real question here, though, is whether or not Under Armour belongs in the GM Building amongst rarefied luxury flagships as well as the only electronics company that approaches luxury brand status? Nike, for all its prosaic qualities, has a coolness factor that allows it to be included amongst the avant-garde designers curated at Comme des Garçons' Dover Street Market. We could see it moved to the GM Building, but Under Armour? Does it really have that level of prestige?
We tend to think no, not that that has any bearing on whether or not a lease will be negotiated and signed. It does, however, remind us of the early 1990s, when there was a multi-level Warner Brothers Studio Store on the corner of 57th and Fifth, and a few blocks down Fifth Avenue, shoppers found an equally lavish Walt Disney store. Retailers in the neighborhood griped that the stores were degrading the area's prestige level (though there were fewer complaints when Nike took over the beleaguered space that was originally Bonwit Teller's replacement store). Eventually, those two cartoon palaces became Louis Vuitton and The Polo Store, and all was once again right with Fifth Avenue. Will the same sentiments follow Under Armour to the GM Building. The brand seems at home with a huge flagship on lower Broadway in SoHo, but will is be as comfortable a fit on one of New York's most luxurious corners?