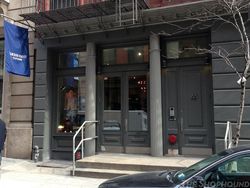 Much admired men's store Carson Street announced that it would close its doors at the end of June after just over three years in business.
Originally opened on Crosby Street as Carson Street Clothiers (pictured at right), the store recently made a major move to a larger but somewhat more out-of-the-way space last Fall coinciding with a new abbreviated name and distinct change in direction from a modern, updated classic point of view to a more progressive style. Perhaps it was too much change too fast. Trouble seemed to be brewing earlier this week when cofounder Brian Trunzo announced his exit from the company to pursue his own projects. The store's 2013 debut was highly anticipated by industry watchers as an audacious project from menswear fans but retailing outsiders Trunzo and Matt Breen. The shop's construction was chronicled on Esquire.com, and was greeted with praise when its doors finally opened featuring a well edited assortment of the most favored menswear designers of the moment displayed in a welcoming setting featuring a cozy lounge and friendly salespeople. The location was smartly chosen as Crosby Street became home to more and more complementary stores like Saturdays NYC and Miansai. The arrival of Seattle's Totokaelo last fall seemed to solidify the street as a prime destination for shopping, but Carson Street was already planning to relocate to a block of Greene Street that was further off the beaten path of shoppers.
A new, separate wholesale collection called Deveaux was launched earlier this year at New York Fashion Week Men's for this fall, which may have been one complication too many too many for the still growing company. That business will continue even as the store closes, and is expected to be found at Totokaelo, United Arrows and Spruce according to WWD.
The Shophound will miss browsing through Carson Street's racks, and its always sad to see a promising shop depart before its time, but the predictable silver lining remains what will have to be an excellent G.O.B. sale over the next couple of months.