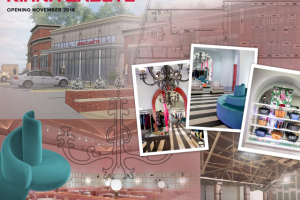 Rendering and mood images via WWD

Enduring SoHo women's boutique Kirna Zabête has weathered all sorts of retail conditions the have felled lesser stores since it appeared in 1999, and is more than surviving —it's expanding. After buying out her business partner Sarah Easley's ownership stake earlier this year, now sole owner Beth Buccini is launching a temporary store for the next couple of months in East Hampton —not a terribly surprising development— and, more importantly a permanent satellite location not in the expected NYC area, but in Bryn Mawr, Pennsylvania on Philadelphia's main line.
While seasonal Hamptons stores are a time honored business opportunity for city retailers, opening in another city is a more daring move. Bringing her boutique to wealthy uptown shoppers who would be a safer strategy, but an expansion to another city gives Buccini the opportunity to bring Kirna Zabête's boundary pushing point of view to an affluent shopping area with less competition than one would have to fight in a designer-heavy market like New York. “I’ve been observing the fashion and I found women are hungry for new ideas and excited about fashion and they’re really underserved,” Buccini tells WWD. “I really went deep into the demographics in the area. There are so many universities and private schools all around, and really the only game in town is the mall.” Having moved her family to the area, the retailer is familiar with the market. The upcoming 32,000-square-foot store (pictured) will reflect the bold look of the SoHo mother ship and will open in a new shopping development aimed at affluent shoppers who can expect to see the store later this fall, opening with resort and holiday collections.

Posted at 09:03 AM in Designer Boutiques, Fashion News | Permalink | Comments (0)