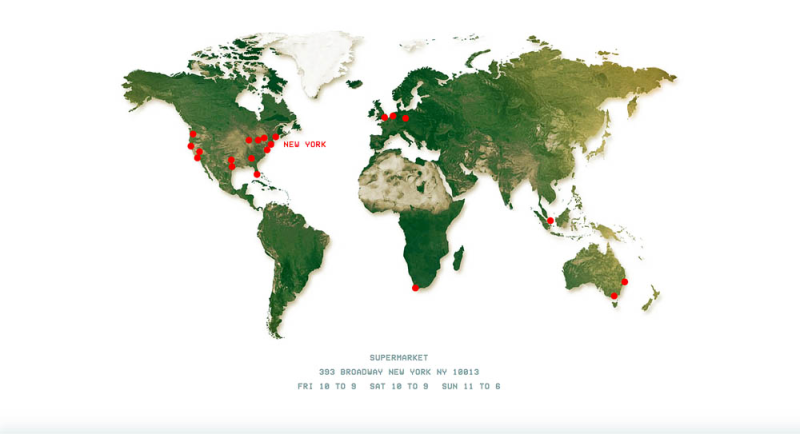 Click image for a larger view in a new window

Perhaps you camped out in line this past Spring to grab an exclusive piece of Kanye West's tour merchandise at his SoHo pop-up shop. If you didn't, you have a second chance this weekend, as West's Life of Pablo pop-up stores are not only returning to New York and L.A., but also to 19 other cities worldwide where fans will be able to buy exclusive 'Pablo' tour goods. As shown above, the NYC edition will be opening on Friday morning on the northern edge to TriBeCa at 393 Broadway between Walker and White Streets, easily accessible by the A,C and E trains and not far from the 1. Last spring, the New York shop reportedly grossed a cool $1 million over a single weekend of selling tees and jackets and hoodies along with a few special vintage pieces, so a larger scale return seems like a no-brainer. It also marks a major expansion the concept of selling tour goods somewhere outside the tour venues so they can be available to fans whether they have gotten to see the show or not. Justin Bieber has been selling tour merchandise from his latest tour in stores ranging from Barneys to Target, but leave it to Kanye to exert a bit more control and exclusivity over his tour shops. Other cities to be graced with a pop-up  include London, Amsterdam, Berlin, Cape Town, Singapore, Sydney, Melbourne, Portland, San Francisco, Las Vegas, Dallas, Houston, Miami, Atlanta, Philadelphia, Boston, Chicago, Detroit and Toronto. Don't confuse this with the Yeezy x Adidas stores that the designer is planning with the athletic wear giant for his newly reconceived fashion collection. That should be coming sometime next year, but in the meantime, brace yourself for some crowds just south of Canal Street this weekend. Find other pop-up store locations on West's website, where an interactive map will direct you to the nearest location.