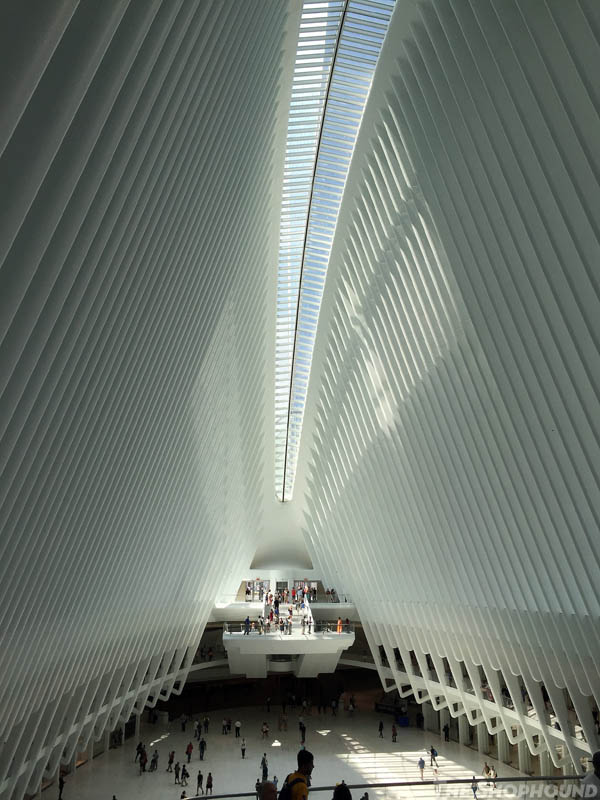 This week, the Westfield Corp. unveiled its most spectacular shopping center in what is possibly its most controversial and likely the most expensive location to construct in the city, if not all of America. The Santiago Calatrava-designed Oculus is the dramatic centerpiece of World Trade Center redevelopment with a multi-billion dollar price tag that has left New Yorkers scratching their heads as if to say "Wait, we said we would pay how much for that thing?"
People will debate the return on that investment for years to come, until it no longer becomes relevant, but along with the opportunity for regular folks to finally walk through that strange, spiny structure comes a reason to be there, which is, of course, shopping at the Westfield World Trade Center. The financial district has become the white hot center of attention for New York City's real estate community for several years now, and the area is finally starting to bear fruit as the vast transit hub is finally ready to show off its dazzling tenant list —even if some of those tenant aren't quite ready to open their doors yet. Like in any new mall, not every store is finished, but we can see what will be arriving in the coming weeks, and the question is, do you need to go out of your way to go shopping in the newly retail-packed financial district?
Our answer: Maybe? Maybe not.
Like its also-highly touted neighbor Brookfield Place, which we understand is doing well with its collection of contemporary-to-luxury retail boutiques, There is no store open or coming to Westfield World Trade Center that isn't open somewhere else in the city in what is probably a bigger and more convenient iteration. That is not to say that the stores are unwelcome. The mall's biggest store appears to be the city's umpteenth Apple Store, and while we have several of those already here, this one should easily be kept busy with it its captive customer base in the surrounding area. That is probably the same story for all the other stores there. Did we need a new Kate Spade boutique? No but the women of the financial district will probably be happy to see the store in the neighborhood which, up until now has mostly leaned towards men's retailers, given the still predominantly male industry it serves. Though it is a jaw dropping setting, the Oculus is still a glorified transit hub, and the shops inside are geared to serve the vast numbers of workers who will stream through on a daily basis from the subway and the PATH trains, as well as the gawking tourists who have made the location a must-visit stop on their tour. If it is the most convenient shopping neighborhood to your location, then yeah, it's not a bad collection of stores at all, but if you live uptown, or even downtown, many of the stores are already more conveniently well ensconced with flagships in Midtown or SoHo or the Flatiron District or the Upper East Side. What you may want to travel to see is the spectacular building itself. The scale is dizzying, literally. There are some areas that are vertigo inducing, like a wide curved set of stairs on the east end whose lack of railings is a bit unsettling, and there are many areas of the building where the scale is oddly off-putting, but the structure is indeed a sight to behold, like the set for a futuristic movie yet to be filmed. The long-rumored remake of Logan's Run, perhaps? The space is majestic and thrilling, and its sprawling connectivity with the other new and redeveloped structures and transit systems make one feel a bit like one is in an enclosed community large enough to never have to leave. It has the immaculate perfection of a set from a Star Trek movie —the big budget new version, not the original series— but while that architecture is usually computer generated, this one is all real with the same cold perfection that always hints at something less pristine underneath. The vast concourse (pictured below) seems almost too empty, as if any week now, it will be furnished with the kiosks that dot the interiors of every other mall. Time will tell if the need for more profits calls in a Proactive stand or Piercing Pagoda. How the dust settles will determine if it becomes a vibrant city landmark or a dreary boondoggle of taxpayer resentment, but for now, Westfield World Trade Center still has the cool glow of its nascent weeks. 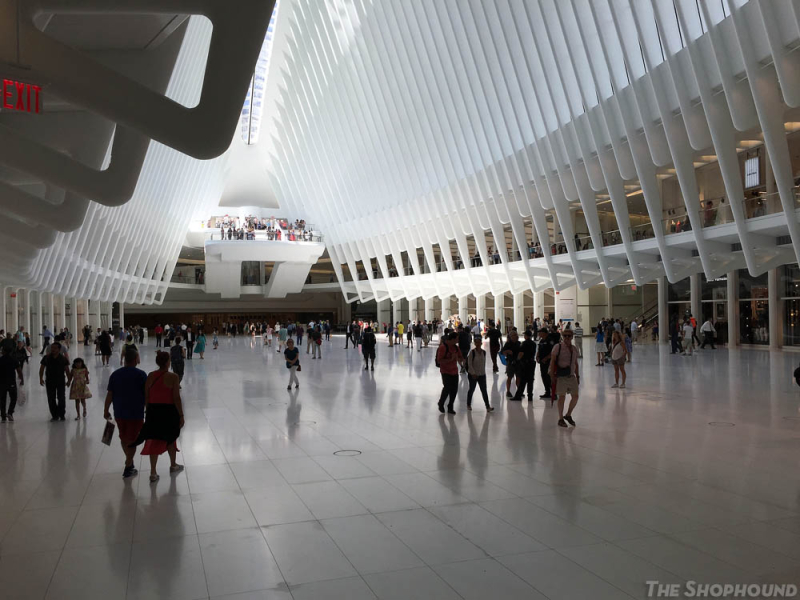