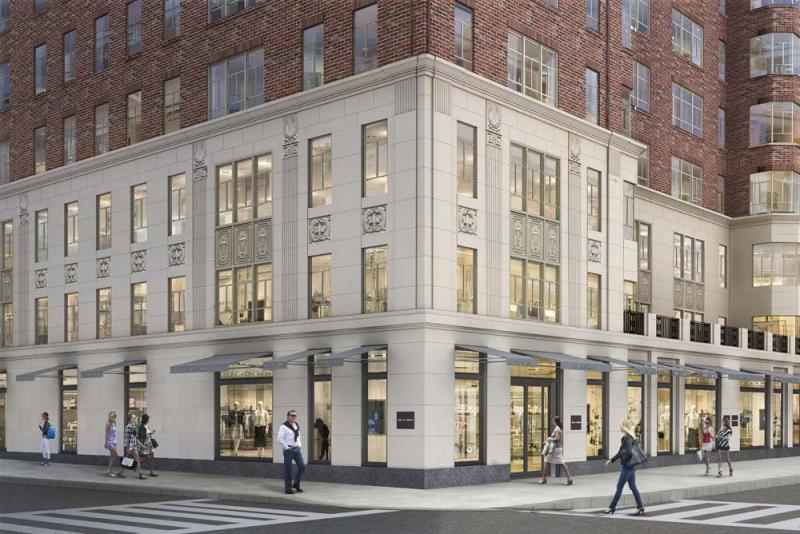 Remember a couple of years ago when we passed along the news that an upstart Qatari luxury label called Qela was opening a glittery flagship store on the corner of Madison Avenue and 61st street (rendering pictured above) in the long-gestating, renovated retail section of the former Carlton House at 680 Madison Avenue?
Not to be cynical, but that's the sort of ambitious retail debut that we usually take with just a grain or two of salt: "Heretofore unknown brand from a faraway land to make splashy New York debut at phenomenally expensive location". Well, it turns out that Qela, if it even still exists, will not be making its way to Madison and 61st Street after all. About a year ago, word was out that the space was being shopped around for a sublease, and the original lease was eventually terminated before any further action was taken, leaving it available for Tom Ford to swoop in and secure it for his next Madison Avenue boutique. No, he will not be among those with dual shops on Madison, but will instead move his flagship store downtown from the 70th street corner where he first debuted his apparel collections under his own label. The 2-level 12,300 square foot store is just a bit smaller than the current flagship, but the location, just across 61st Street from Barneys, has an even more prominent profile. While is Ford's current store is keeping company with Ralph Lauren, Prada, Bottega Veneta, Céline and other illustrious names, the new location will be sharing the block with a new Brioni boutique expected to open later this year to show off that brand's radical revamp. Other menswear neighbors include Berluti, Brunelli Cucinelli and the Hermès men's store. Though Barneys across the street as radically shrunk its fabled suit department, it also remains a major menswear store (where Ford does not sell his collection) and an important traffic generator for the neighborhood. Though Ford has shown a women's collection for several seasons, he started his signature collection with men's apparel, and it would appear to be the bigger part of his fashion offerings. There's no official time frame for the new store opening, but the raw space has been ready for a new inhabitant for quite some time now, so late 2017 might be a reasonable estimate to see how Ford will update his typically lavish retail concept.