SO, THIS THING AGAIN:

The Barneys Warehouse Sale Is A Miserable Affair 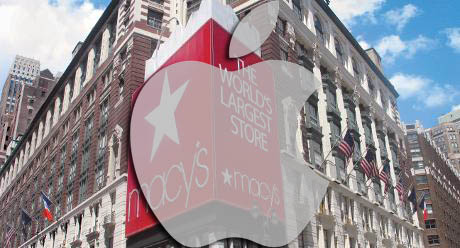 With new iPhones and Apple Watches on the way comes the news that Macy's will open Apple's first full in-store shop at its Herald Square flagship next month. While 180 additional Macy's locations will be selling Apple Watches, this will be the tech behemoth's first in-store shop inside a U.S. Department store, and it will also carry iPhones, iPads MacBooks as well as other items and accessories for a more complete brand presentation. According to WWD, the shop will be set up on the main floor of the store's Broadway side which is devoted to makeup and accessories including in-store boutiques from Gucci, Louis Vuitton and Burberry. While Macy's Herald Square is known to have several leased in-store departments like Vuitton and Gucci, it is unclear at the moment whether the new shop will be operated by Apple or Macy's itself, but it could serve as a test for similar arrangements in other prominent flagship locations in the chain such as Chicago or San Francisco, or perhaps as a model to be adopted by other retailers as well. In recent months, Macy's has been struggling to right-size its sprawling fleet of stores cobbled together from several different department store chains as the result of a series of mergers over the past couple of decades. The luster from Apple's desirable product offerings may help the chain to attract new customers as it tightens up its retail footprint.