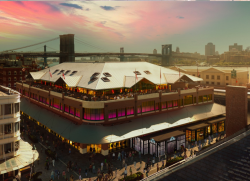 If something seems dismaying to you about that headline, then you are not alone at scratching your head. It is exciting news that one of global fashion's most influential stores, 10 Corso Como will soon be arriving in New York, one does wonder just a bit what owner Carla Sozzani chose the Seaport as the location for her company's only North American store. After all, it is literally all the way across the entire borough of Manhattan from Brookfield Place and the Westfield World Trade Center Oculus, where the Financial District's retail renaissance is currently under way. That is apparently why Sozzani wanted the location. “It’s not a traditional area," she tells WWD "it is new but also one most linked to the city’s history and origins, over the docks, with the Fulton Fish Market [dating back to 1822] and a view on the river. Its history of international commerce and innovation is inspiring.”
The store is set to open next June in the Howard Hughes Corporation's revitalized Seaport development (pictured). It will be conceived as more of a destination in the manner of Dover Street Market, for example, but rather than focusing on clothes, it will emphasize design pieces and hospitality with food and beverages. It will join Sozzani's original Milan store as well as the three branches she has opened in recent years in Shanghai and Bejing, China and Seoul, South Korea. Though a removed from the neighborhood's other retail hubs, the new store is expected to be surrounded by new food and dining concepts from David Chang and Jean-Georges Vongerichten as well as a luxury iPic movie theater.