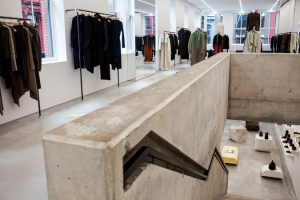 It's been a minute since we talked about the Thursday Styles' Critical Shopper here at The Shophound because, you know, we've been doing it for a while, but today marks a first for the column: two Critical Shoppers combine forces as Jon Caramanica and Katherine Bernard explore the new Rick Owens boutique in SoHo together. After quite some time of each shopper ignoring the offerings for the opposite gender in the boutiques they have covered, we are finally getting a comprehensive assessment of everything all in one column.
So what have we learned? Not too much about what we didn't already know, though both critics concur that Owen's clothes, freeform-like though they may often seem, disappointingly appear to look their best on the willowy model-esqe type of person so beloved of designers in general. Though only one of our shoppers comes close to fitting that bill —Ms. Bernard is determined to be Tilda Swinton-esque in her angular haircut— they soldier on, noting the significance of Owens' sumptuous fabric innovations that aren't always apparent from afar. Ultimately, they conclude that Owens is more Rick-Owens-y than ever at his new, more accessible location on the corner of Howard and Crosby Streets. This is good for him commercially since the designer has been so pervasively copied in recent years that his signature look, though not exactly classical, now feels much less avant-garde than it once did. It's all still hideously expensive, though, even if the pre-Raf Simons era Jil Sander boutique it took over has been stripped of its polished marble in favor of humbler concrete.