Ralph Lauren's Fifth Avenue Polo Store Is Getting The Axe 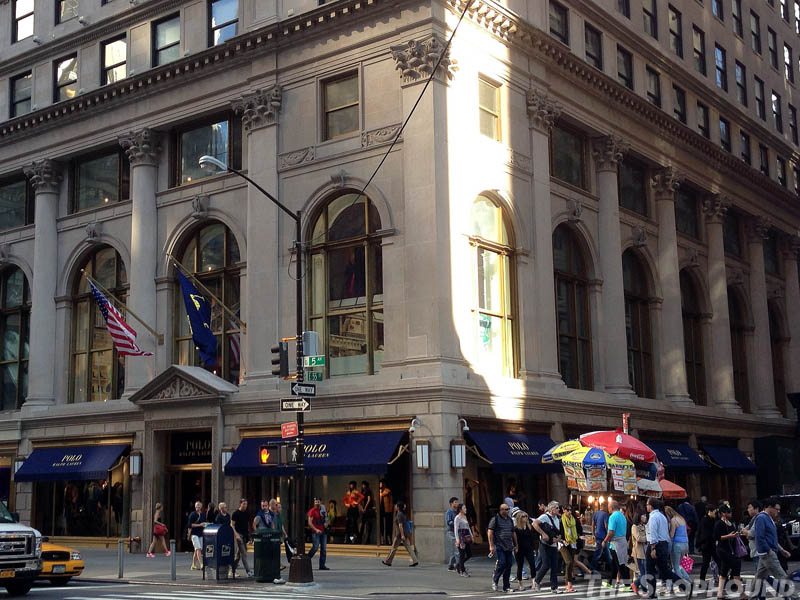 In an unexpected but only marginally surprising move, Ralph Lauren will be shuttering the splashy Polo flagship store on Fifth Avenue as a cost cutting measure. It turns out that the high profile, loss leader flagship stores we have come to know so well in New York are not the investment in publicity that they once were. WWD is reporting that the store closure along with other measures including a workforce reduction and an updated digital platform will save the company a not insignificant $140 million per year after an initial $370 million cost.
Opened less than three years ago, the Polo store was meant to be represent a grand relaunch of the Polo brand for Lauren. it was to put the designer's original brand back into the spotlight with the rebranding of his women's "Blue Label" collection to make Polo a masterbrand for men and women along with a newly designed label. Its Fifth Avenue location should have been a tourist magnet, and the attached restaurant became one of the most coveted reservations in town. This is the first indication we have heard that the lavish three-level store has not lived up to expectations, although when it opened we were struck by impression that though the store is very large, it offered little in terms of newness in either environment or product. Lauren still remains content to draw from the same creative wells he has established over his 50 years in business. That leaves us with a whole bunch of reinterpretations of reinterpretations of the same things he has been making for years., which may be the root of his company's current troubles. At any rate, the "way forward" business reorganization plan that the company has been following seems to be the on right track in shedding some of the behind the scenes excesses that has always plagued the organization, but it is somewhat surprising to see it extended in such a high profile way. At least it shows that they are serious about setting the business right.
There is no closing date announced for the store, and the company is not giving up on new retail concepts, and it identified the Ralph's Coffee counter within the Polo store as a future opportunity. We also expect a newer, more modestly sized Polo store to appear somewhere in Manhattan to maintain the label's presence. With all this cost cutting, we immediately thought about the future of the cult-sized RRL label which has gone through several iterations before settling on an antique-inspired menswear theme. The collection is presented with evocative stores in Los Angeles and SoHo, but not a business on the scale that might warrant its continuation at this point under the company's apparent willingness to make hard choices. One has to wonder if the big RRL store on West Broadway, which has also had a series of lives under Lauren, might be headed for yet another transformation into a Polo store?

UPDATE:
The store is slated to close on April 15, only a week and a half away, however, the popular Polo Bar restaurant is expected to remain open as far as we can tell.