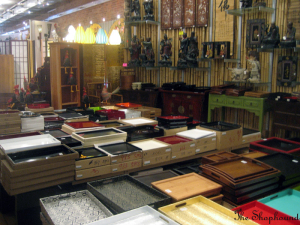 It's been a rough road for the beloved downtown emporium Pearl River Mart which was forced out of its multi-level SoHo home (pictured right) with what so many city retailers continuer to face, a massive rent hike. It has been a few years since then, and while the company opened an outpost in Tribeca last fall, a new location in the Chelsea Market with a 15-year lease will receive the benefit of the kind of teeming shopping crowds it used to find regularly in SoHo when it opens later this year. The new store will be 3,500 square feet and along with the familiar mix of Asian products the store is promising special food events, performances and other cultural activities.
Anyone who hasn't visited Manhattan's original food hall will discover that over the summer it has grown by opening up a whole new floor downstairs, an while we don't yet know the specific location of the new store, there is a lot more space for new businesses in the building. According to DNAinfo, Pearl River Mart will be joining a new yet to be named farm-to-table restaurant with an adjacent furniture store from chef John Doherty of Tribeca's Black Barn restaurant and Mark Zeff of the apparently unrelated interior store BLACKBARN Shop. Both ventures are expected to open later this fall, so while the Meatpacking District a block or so south seems to be suffering from a lack of excitement, the Chelsea Market itself looks like it will continue to be a major draw in the neighborhood.