Barneys Has Ditched The Upper West Side 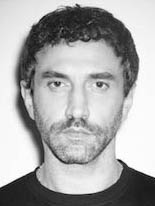 Well, you cannot say that he doesn't take full advantage of the element of surprise.
Riccardo Tisci, who exited his star-making creative role at Givenchy just over a year ago, will step into the Chief Creative Officer role at Burberry, ending speculation about what the next moves would be for both the designer and the brand. Burberry's much admired former creative leader Christopher Bailey presented his farewell collection just weeks ago, and it was expected that the next collection for the British heritage house would be created by an anonymous design team, but Tisci will be on the job fast enough to present his first collection in September, to great anticipation. The move re-unites Tisci with former Givenchy CEO Marco Gobbetti, who currently serves in the same role at Burberry.
The move raises a few questions about Burberry's future direction. Over the past few years, the brand has merged its luxury "Prorsum" runway collection with its more accessible Burberry London and Brit labels for a unified brand presentation that pulled the label out of the top tier luxury segment, a move that has had mixed results for several brands who have executed similar consolidations. Last year, Gobbetti promised to reposition Burberry at the top of luxury segment, which would fit with the strategy of bringing in an experienced couturier like Tisci as creative director. That could mean some changes in distribution strategies for the brand which might affect its retail partners. As for Tisci, he managed to transform Givenchy with a combination of opulent women's collections and increasingly sporty men's presentations with an aesthetic ranging from the most ornate, Goth inspired ballgowns and Oscar red-carpet fare to sweatshirts festooned with intriguing prints and patterns. The breadth of his design aesthetic should serve him well at Burberry which has offered a similar range of products alongside its core product line, the ultra-classic trench coat. Upon his surprise departure from Givenchy last year, where things seemed to be chugging along nicely for all parties, rumors were strong that he would be joining Versace as its design chief as soon as his non-compete requirement had expired, but that presumption seemed to falter in recent months as some suspected that Tisci might revive his own short-lived label fueled with the fame and design clout he had built up while at Givenchy. He had been designing a sneaker and sportswear collaboration under his own name with Nike that had been well received, but it is likely that that team-up is finished with Tisci's new position. "I have an enormous respect for Burberry's British heritage and global appeal and I am excited about the potential of this exceptional brand,” says the designer in a statement. “I am honoured and delighted to be joining Burberry and reuniting with Marco Gobbetti." Fashion fans will be waiting anxiously to see what the new collaboration has to offer as one more of the industry's "orphan" star designers finally finds a home.