Can Barneys Burnish Its Image With New Transgender-Focused Advertising? 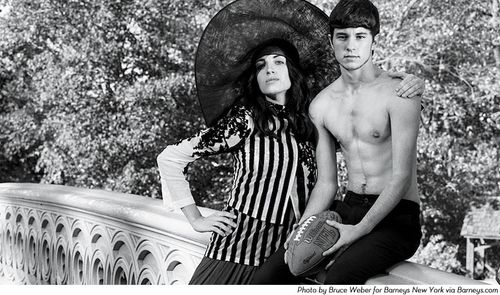 For the next few days you will be hearing a lot about Barneys' latest advertisements. The store has engineered a media blitz to launch "Brothers, Sisters, Sons & Daughters" which collects 17 transgender models (including Arin Andrews and Katie Hill pictured above) and superstar photographer Bruce Weber for the store's Spring 2014 advertising program —though it is less of a retail campaign than a social advocacy project. Beyond just shooting ads that will appear in glossy magazines and an elaborate 32-plate, Italian-printed portfolio that will replaces usual, seasonal catalog, the models are also featured in short videos, and each one has been profiled by Vanity Fair contributing editor Patricia Bosworth on the store's website. The advertising images are beautifully done, and the associated media is illuminating and often moving. Barneys has joined with the National Center for Transgender Equality and the LGBT Community Center for the campaign, and on February 11th, 10% of sales from all 11 of the chain's flagship stores will be donated to the two organizations.

The campaign broke online yesterday with an article that appears in today's New York Times, and it is also featured in today's WWD. This morning, Barney's customers received an email blast introducing the advertisements and directing them to the website. If the campaign does not make it to the Evening News tonight or at least on "The View" within a few days, it would be considered something of a failure. It comes on the heels of a Christmas season which Barneys management would probably like to forget when a promising Holiday promotion featuring Jay Z was hopelessly overshadowed by a racial profiling scandal that is still not fully resolved.

At this very moment, there is nothing that Barneys would like more than to be seen as socially conscious, or even progressive. In spite of the likelihood that the campaign was in the works long before the Christmas season went sideways for the store, most observers will see it as a response to the avalanche of unfavorable press at the end of last year which saw Barneys officials and the Police department trading blame for the results of some very poor judgement in the store's security department. Whether the new campaign will succeed in improving the store's tarnished image remains to be seen, but it is guaranteed to push it back into the news, and that is generally what has characterized the goals of the new Barneys promotional schemes. Barneys' creative director, Dennis Freedman has said in WWD that the choice to do these new advertisements, had “a lot to do with the realization that such extraordinary progress has been made in the last few years for the lesbian, gay and bisexual community, but it’s striking how the transgender community has been left behind. It’s disturbing and upsetting to see that.” It's an issue that has been in shadow partly because many transgendered people have, in the past, preferred to remain quiet about their experiences so they could go through their lives without judgement. Transgender Visibility has recently increased dramatically with performers like Laverne Cox of "Orange Is The New Black" eloquently raising awareness, most notably on a recent episode of Katie Couric's talk show in which Cox and former "RuPaul's Drag Race" contestant Carmen Carrera pointedly explained to their hostess how it is important to be seen as more than simply the results of a gender reassignment process. Clips from the show went viral, giving even people who who already considered themselves socially progressive something to think about

Ordinarily, one wouldn't think of this particular issue as fodder for a department store promotion. Typically, stores will ally themselves with less controversial causes like Breast Cancer charities or AIDS fundraising, but Freedman's strategy for the Barneys has been more like that of a magazine, looking to create excitement and interest that will drive readers to the newsstand, or, in this case, the handbag counter. Since he arrived at the store, he has linked with celebrities and fashion personalities like Lady Gaga, Carine Roitfeld, Daphne Guinness, and the Walt Disney Company to varying degrees of success. Many considered the Gaga and Disney Holiday promotions of 2011 and 2012 to be off-brand for the store. Though they drummed up plenty of press, few believed that they were successful at creating real excitement among Barneys' existing customer base or at bringing in new customers who fit the store's affluent profile. Barneys, after all is not a magazine, and needs to sell a lot more things than publications. This new advertising effort is bound to generate more attention for the store, and, at its best, it should achieve its goal of raising awareness and understanding for the trangender community, but whether it can successfully turn the conversation about Barneys away from racial profiling, and, more importantly, generate sales and new customers, is something we shall have to wait to see.

Posted at 11:12 AM in Advertising, Barneys, Department Stores | Permalink | Comments (0)