Photo by Emily Andrews for The New York Times

A new Critical Shopper has arrived at the Thursday Styles today. We don't know if Katherine Bernard will take over Molly Young's women's shopping duties permanently, but she does give us a respectable survey of the new Balmain boutique that quietly opened its doors earlier this month in SoHo. Don't worry if you are concerned that glittering label's thirst for publicity is starting to wane. The official opening party is scheduled as this year's Met Ball after-party on Monday night. Now you can picture the requisite Kardashian/West/Jenner extravaganza, and our shopper reminds us that it is almost impossible to make mention of the Balmain brand without also using the words Kardashian and Instagram. She also notes pointedly that Instagram followers do not necessarily translate into throngs of eager customers. Despite Balmain's social media following of multiple millions, the store is a quiet and serene environment in neutral shades of beige and black when she visits mostly because clicking 'like' and 'follow' are free, but owning single piece of Balmain apparel beyond a $365 t-shirt requires four figure investment at minimum. And what of those clothes? They are tight.

These clothes are honest. They hold you. My designer friend tells me that the fabric embrace comes from technically advanced four-way stretch. There’s pull and lift. There’s no darting or corseting, it’s just extremely special fabric.

Ultimately, the experience seems like a taste of fantasy, complete with a salesperson impersonating a paparazzo. For better or worse, Balmain and its once reserved designer Olivier Roustieng has thrown their lot in with social media stars and red carpet glitz. The rabid rush for last Fall's H&M collaboration collection proved that, so if runway walking  in glittery opulence is your aspiration (and within your means), your boutique has arrived. 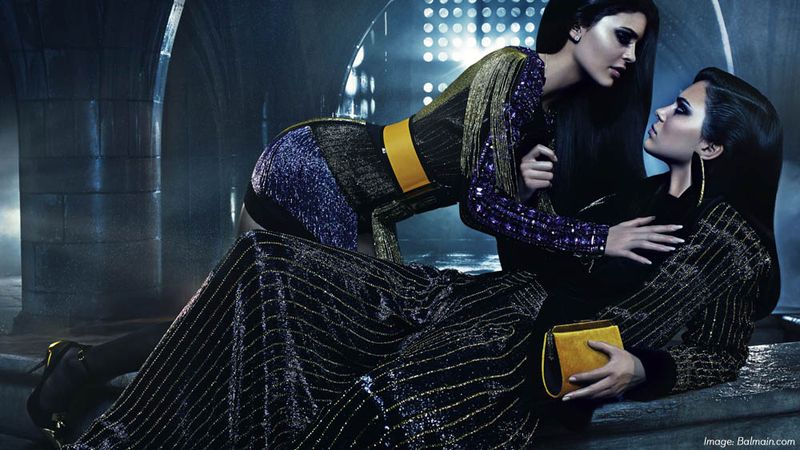 Perhaps no designer brand has benefitted more from an H&M collaboration than Balmain. The publicity onslaught leading up to that launch has turned the it and its current creative director Olivier Roustieng from insiders' niche label to multimedia phenomenons in a matter of months, and, for New Yorkers, the cycle is now fully complete with a Balmain boutique opening on Wooster Street today. This store will have the real stuff —no more cut rate collaboration capsules— with staggering price tags to match, and it's the first Balmain boutique in the U.S., one of only a handful worldwide. Compared to the H&M launch, the boutique is opening fairly quietly, but its arrival continues to fortify SoHo's position as a premier alternative to Madison Avenue or Midtown for luxury brands.

CORRECTION:
Well, it looks like a misleading item on Vogue.com suggested that the Balmain boutique was opening on the 19th, but a stroll past 100 Wooster Street nearly indicated that is not the case. The store should be coming soon, though. We just don't know exactly when. 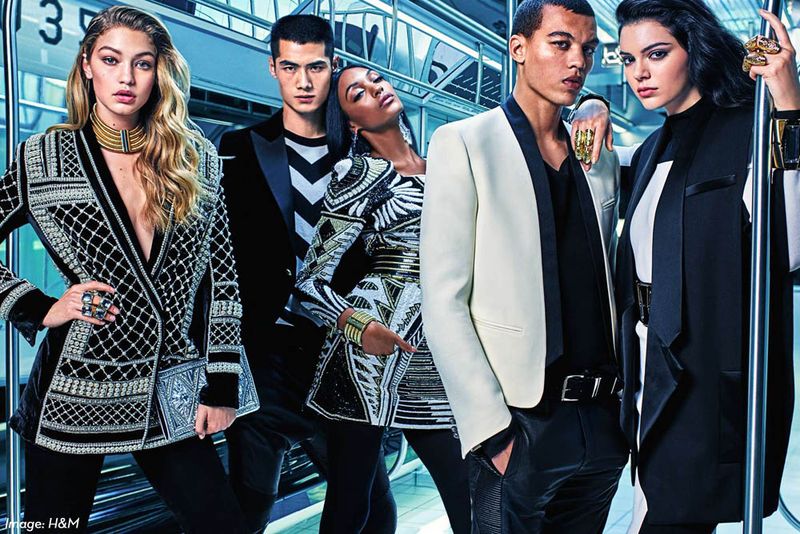 In case you haven't heard, there's this Balmain collaboration with H&M that arrives in stores today.
Well, honestly, if you aren't reading this before lunchtime, it has probably mostly departed H&M stores by now.
In a season that has been marked by some pretty impressive collaborations from the likes of Lemaire, Carine Roitfeld and Adam Lippes to name a few, this one is the grand finale.
From what we have been able to gather, the glitzy/sexy designer collaborations like Versace and Roberto Cavalli have been the fastest sellers for H&M, and Balmain is right in that wheelhouse, so the reasonable expectation is pandemonium when the doors open today. Expectations are high all around which is probably why this collection has some of the chain's strictest return rules. Reports from last nights VIP shopping session tell us that the privileged few ransacked the collections, so we can only imagine what the masses who have been waiting outside the stores since yesterday will do.
This particular collection seems like it has been promoted more heavily than any previous H&M collaborations, so, honestly, we are a little tired of seeing pictures of it by now, but if you are an eager Balmain fan who has been anticipating this for months, we hope you find all the pieces you wanted to get. 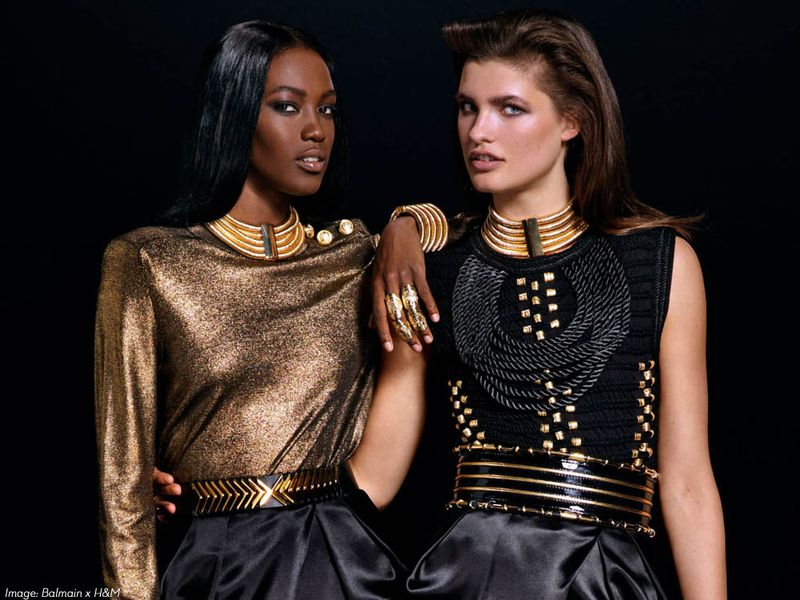 The Balmain x H&M lookbook images have officially hit the web a couple of weeks earlier than we would have predicted, probably as a result of an unexpected leak several days ago  that was probably the fault of H&M's webmasters. Anyway, the looks are out, as much like the majority of H&M's previous designer collaborations, the collection is essentially a compilation of designer Olivier Roustieng's strongest signature looks over the past few years.
Graphic black and white? Check.
Jewel toned satin? Check.
Brass buttoned military coats? Check
Embroidery encrusted minidresses? Check..and so on.
That's a good thing for Balmain fans, and generally, it's also a recipe for a sellout launch on November 5th. Maison Margiela proved that H&M's designer collaboration customers prefer glitz and glamor over cerebral intellectual looks, and Balmain is providing sparkle and shine in generous doses.
Though a full price appears not to have been released, some prices have trickled down so we know that the biker pants in faux leather will be $99, the black and gold ankle sandals will be $199 and the thigh-high suede boots will be $349. The most expensive pieces appears to be the black and white embroidered jacket for $549 and the fuchsia beaded dress for $499, which is really pushing the boundaries of H&M's pricing for these lines, but it seems that there is little price resistance for these collaborations.
After the jump, have a look at the complete lookbook for men and women. 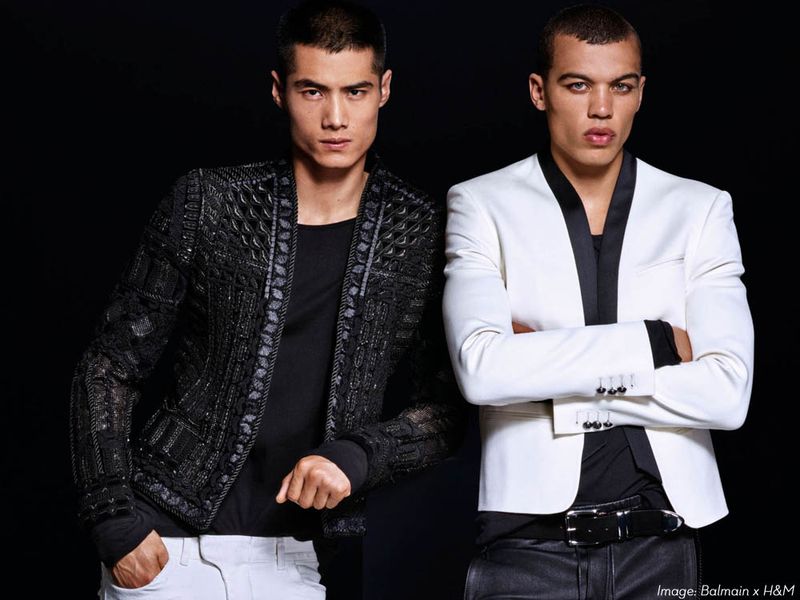 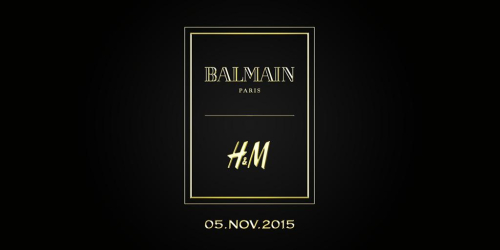 In a first for H&M, the chain's big Fall designer collaboration was announced by its designer on the red carpet of an awards show. At last night's Billboard Music Awards red carpet, Balmain designer Olivier Rousteing  announced the upcoming collaboration flanked by models Jourdan Dunn and ubiquitous multimedia phenomenon Kendall Jenner (pictured below). His cohorts were reportedly dressed in looks from the upcoming collection, though it is unusual for H&M to release any kind of preview this far ahead of the launch date, November 5th. Further confirmation soon came from both Rousteing's and H&M's Instagram and Twitter feeds. While H&M has yet to issue a full press release, the only other bit of information we know is that the collection will include both women's and men's clothing and accessories, and, of course, can best be followed on social media with the hashtag #HMBalmaination. Will there be some good biker pants? It's a good bet, and something to ponder before the fast fashion giant opens its biggest store on the planet on Wednesday at the former Herald Center.
See some relevant embeds below, and stay tuned for updates.

UPDATED with the official images & video.
In an official statement designer Olivier Rousteing says, "I want to talk to my generation: this is my main purpose as a designer. H&M allows me the unique possibility of bringing everyone into the world of Balmain, getting a piece of the dream and creating a global #HMBalmaination: a movement of togetherness, fueled on a hashtag. The collaboration felt extremely natural to me because everybody can connect with the H&M brand. It calls for unity, and I am all for it." 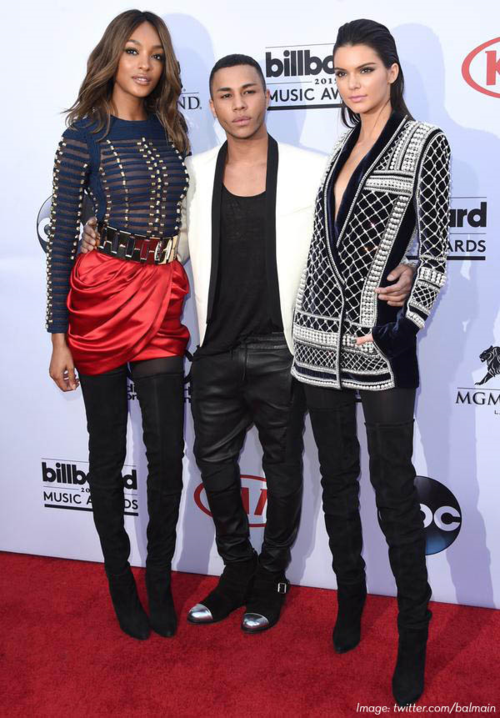 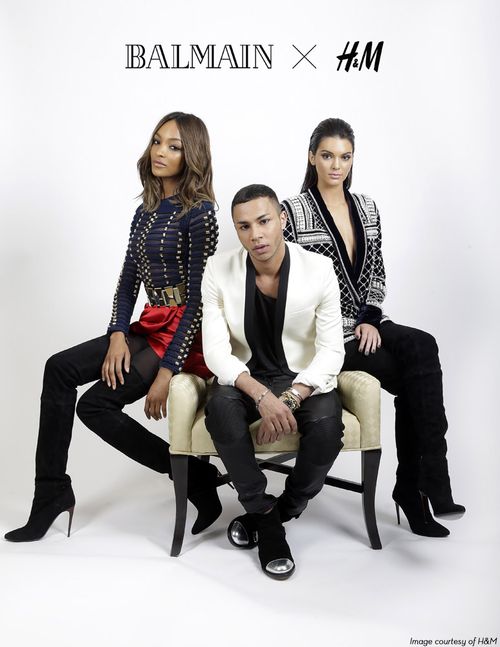