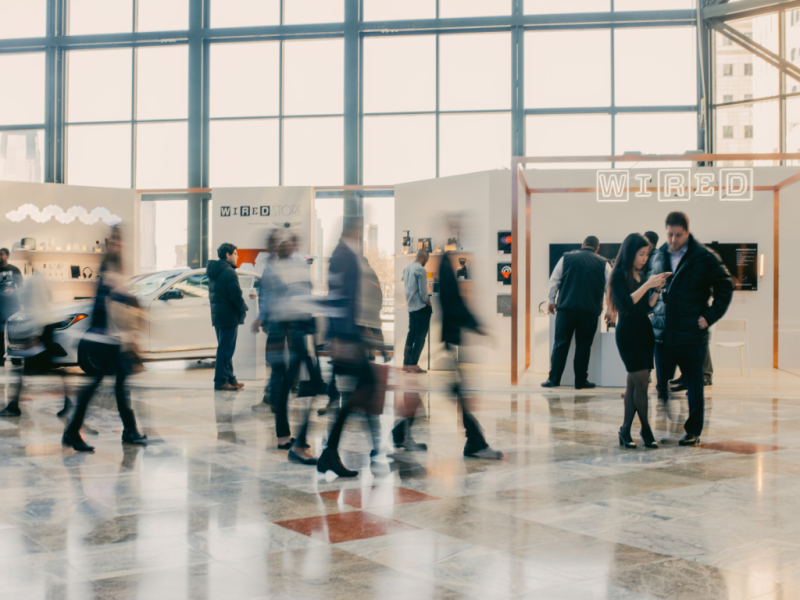 One of the season's favorite shopping events is making its 4th appearance tomorrow when it opens its doors, such as they are, at Brookfield Place in the Financial District. Not quite a traditional store, this season's WIRED pop-up (pictured above) will be inhabiting a series of booths amongst the palms in the complex's Winter Garden. As usual, it will feature the latest in must-have tech gifts and gadgets as chosen by the magazine's editors. Highlights will range from the Anki Cozmo Collector’s Edition Robot which at $179.99 seems reasonable for a robot to the more extravagant Shinola Canfield Over-Ear Headphones at $595. For tech savvy gift shopping or just a break from the rest of your Holiday shopping, the pop-up will be open through December 22, and most merchandise will also be available online through the Wired Store website, while it lasts. 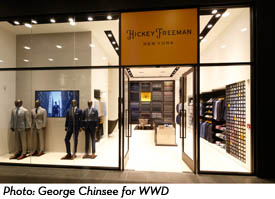 It's been tough going for Hickey Freeman in recent years what with changes of ownership and creative direction coupled with some uncertainty in the men's suit business that has caused a store like Barney's New York to dramatically reduce the space devoted to the category it built its business on to one measly floor in its Madison Avenue flagship —from the original three. Things seem to have stabilized at Hickey, however, and to prove it, the label has opened a modest but noteworthy new store at Brookfield Place right in the middle of the neighborhood where suit-wearing has never wavered. Not a big flashy flagship, the 900 square foot store is devoted to the company's made-to-measure division, a service that falls just short of full custom tailoring, but allows customers to make their own fabric and model choices as well as offers special sizes and fit adjustments that can minimize final alterations. Though there is a selection of ready-to-wear items showing the company's updated look, the new concept store also displays 180 bolts of fabric for tailored clothing and shirts as a part of its sleek, design. It is the first Hickey Freeman retails store created by the brand's new management, Grano Retail Holdings which purchased Hickey Freeman's assets including its famed Rochester NY factories, as well as a long-term license for the brand name which still belongs to Authentic Brands Group. It's a complicated arrangement, but it has kept one of America's great menswear brands alive after a couple of bankruptcies of its past parent companies Hartmarx and HMX. New management is dedicated to revival, and chose Brookfield Place to join in the renewal of lower manhattan but also to give the label more visibility in a market where it believes it is underrepresented. The other obvious part of the store's goal is to show off Hickey's new fashion direction, “. . .so when retailers come through New York City, they can see how we display and present it,” Grano CEO Stephen Granovsky tells WWD.
But what of the Madison Avenue flagship between 54th and 55th Streets? Shouldn't that be the site of brand's high-profile re-introduction? It turns out that that store continues to be owned and operated by a different company controlled by Hickey Freeman former CEO which accounts for its more traditional look and ambiance. That state of affairs may change in the future, but Grano is actively looking for looking for more New York locations to open stores of about 1,500 square feet as well as continue to grow Hickey Freeman's business in the specialty store channel that has historically been its strong suit (no pun intended). The Upper East Side is another target location, so perhaps we will soon see Hickey going head to head with Italian powerhouses like Brioni, Isaiah and Cesare Attolini. If it can stand up to to that rarefied competition, then its future should be as bright as its new yellow logo design. 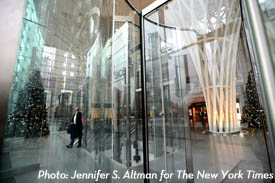 Today's Thursday Styles features steady Critical Shopper Jon Caramanica's take on the beginning of the retail cavalcade that has descended upon the neighborhood immediately surrounding the World Trade Center's memorial as well as its re-imagining still under construction.
And he's finding it all a bit jarring.
Rather than focusing on just one store, he takes on the entirety of the Brookfield Place luxury mall featuring fresh new outposts from Gucci, Ermenegildo Zegna, Bottega Veneta an more among its roster of international status brands. Our shopper's overall thesis this week is that we shop to forget —to anesthetize ourselves against the adversity we encounter in life. In this case, he is obviously making a reference to the tragedy of September 11, 2001 which haunts the financial district in general, and he is really giving in to the ghosts. Of the mall he says, "It is a testament to the resilience of our real estate developers, if not our national mood. Here, at the heart of the city’s suffering, we are being told to shop: To spend is to be healed."
Perhaps we are somehow protesting the specter of international terrorism down town with the kind of luxury and profligate consumption specifically abhorred by our jihadist enemies, but hey, it's New York. We're just being ourselves. By that token, we could argue that the city's sprawling shopping culture exists to distract us from so many of the more disturbing aspects of our city. After all, it's not that we have seen a homeless person or two on Fifth Avenue, but that any city resident has encountered so many in every neighborhood no matter how tony it may be, not to mention everywhere in the public transit system.
But back to today's column, where our shopper has faintly admiring words for the just opened Gucci shop at Brookfield Place. It is the first New York example of the label's new creative director Alessandro Michele's re-imagined retail format for the brand. It's not all that different from the old format which features lots of handbags up front with lots of logos and red and green striped webbing. It's a respectable update that nicely shows off Michele's relentlessly eclectic, dressed-in-the-dark Resort collection, but The Shophound has to admit that we have had a lot harder time working up enthusiasm for a designer who thinks that putting a high, chunky heel on a gold leather version of you grandmother's house slippers makes than somehow appealing.
It does not.
Caramanaica calls the lineup of stores at Brookfield Place "shrug worthy" and it's true in the sense that it appears to includes not a single boutique that doesn't exist somewhere else in Manhattan in a larger and more comprehensive version. Perhaps it is the relentless retail drumbeat of the Holiday Shopping season combined with this year's weirdly balmy Holiday Season that has put his mood off, but still, he doesn't leave empty-handed. Our shopper remembers his professional purpose and picks up a smart overcoat at nearly 60% off from Club Monaco along with a bracing scented candle from Nest.

They all smelled the same until finally I landed on one — Sicilian tangerine — that was almost acidic. It had bite, the scent creeping up my nostrils and scraping away. Instinctively, I winced, but at the same time began to salivate. For a moment, death felt far away.

It's tough to stay down on shopping when it is an explicit part of one's work assignment. The choices are to rally or resign, but everyone is entitled to a case of the Holiday Blues once in a while. Like the neighborhood around Ground Zero, however, one eventually has to pick oneself up and carry on. 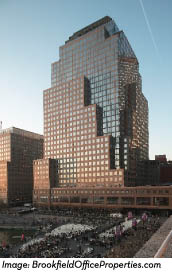 After a casual announcement that it was in the works earlier this Fall, it now appears that Saks Fifth Avenue's freestanding Men's store will land at 250 Vesey Street (pictured at right), not far from the full-line store in Brookfield Place that is scheduled to open this Summer.
The New York Post reports that the retailer has taken the space that was thought to be allocated to French chef Joël Robuchon for a gourmet restaurant and market. Perhaps it was decided that one French culinary hall, Brookfield's Le District, was enough for the area. Saks will reportedly be taking 16,750 square-feet on the second floor of what was originally called 4 World Financial Center which includes all of Robuchon's space plus an additional 4,000 square feet. The space overlooks the Battery Park City marina which will be a nice view for the store currently expected to open in March of 2017. Included with the larger full-line Women's store and an upcoming Off 5th unit on the other side of the World Trade Center complex at One Liberty Plaza, Saks will have an impressive presence in the Financial District, a neighborhood whose potency as a major shopping destination still has yet to be proved.

Saks in, Chef Robuchon out in downtown stunner (NYPost)

Brookfield Place Is Sort Of Open-ish 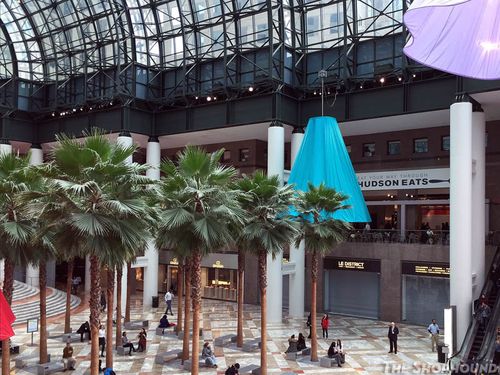 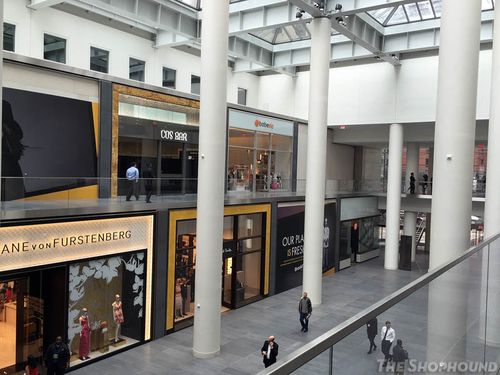