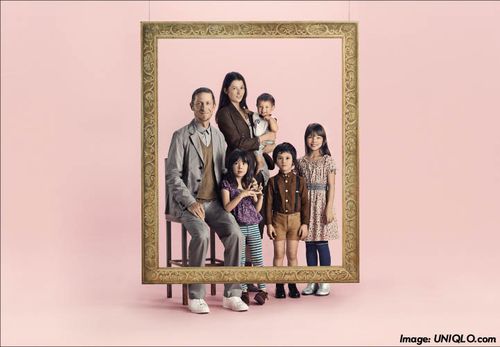 Only a few hours ago, a web page went live and images hit the magical interwebs to finally illuminate us about UU Uniqlo Undercover, UNIQLO's highly anticipated follow up to the much loved +J  collaboration with the designer Jil Sander.

Anyone looking for some of Undercover designer Jun Takahashi's more avant-garde looks translated to a better price point might be surprised to see some fairly traditional family scenes here in the initial lookbook images. In fact, UU is being promoted as "clothing for the families of today", and unlike the chain's preceding collaboration, the 105 piece collection will include 43 items for men, 34 items for women, 27 items for children and even 5 things for babies. The designer collaborated with his wife and partner RICO for the children's collection, inspired in part by their own kids. It's a little hard to pick out the details in the promotional images that have just been released, but Uniqlo describes the looks as follows:

The men's line matches gentle colors with darker tones, while

's offerings for women are based upon an exciting palette of colors and patterns drawn from Takahashi's groundbreaking label. Both the men's and women's lines feature a diverse range of fashionable cuts and patterns.

As the parents of two children, the couple lavished attention on the designs for children and babies to produce a playful combination of vibrant colors, unique prints and fine details, pushing this collection far beyond the conventional realm of children's clothing. With the new

collection, UNIQLO and Takahashi have developed an eclectic range of fine designs for the whole family, so parents can have fun complementing their children's looks.

That should whet your appetite just a bit for the next  six weeks or so until the collection arrives in Uniqlo's flagship stores. If the line does not seem quite as experimental as some might have expected, it should delight fans of more prosaic, everyday Japanese sportswear. The launch is set to debut with the opening of the chain's latest global flagship in Tokyo's Ginza district, and presumably will hit New York's three flagships at the same time. If we receive the entire line, it will also mark the return of children's apparel to Uniqlo's New York stores, something Uniqlo's U.S. President Shin Odake promised The Shophound last October when we toured the new 34th Street store.

Sadly, we only have price ranges in Japanese yen, so to tell you that the line will retail from ¥790 to ¥7990 (roughly $10.50 to $105) might not mean much until the line is priced for the U.S. market given taxes, duties and whatever else comes into comes into consideration in making those decisions.

We will certainly miss +J (and there's still some left at great sale prices —especially outerwear at the 34th street store) but this new collection couldn't look more promising, and we'll be keeping an eye out for more images and information as they hopefully appear before mid-March. 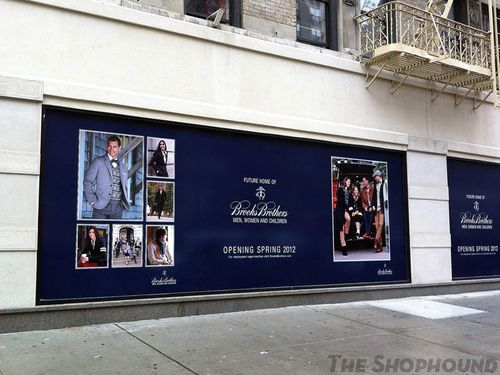 Friday Fashion News: Charlize Gets Sued, DVF Gets Cryptic, Saks Might Get Chanel and Missy Rayder Eats Like a Horse

Charlize Theron's lawsuit has moved up to the Federal level. The statuesque star is being sued by Swiss watchmaker Raymond Weil for breaking her endorsement contract by appearing in public wearing watches by Dior and Mont Blanc. The suit was moved from New York State court to a larger arena because Weil is asking for total reimbursement of Theron's multi-million dollar fee as well as any fees she might have received from other watchmakers. Our question is, did anyone other than the folks at Raymond Weil notice what watch Charlize was wearing? Or are they mad that she might have worn a Dior watch in her commercial for J'adore, the fragrance for which Dior has just renewed her contract? (We love that commercial. Seriously we could watch it on a loop.) Can these sorts of blanket stipulations really be enforced, and how exactly does one define a "public appearance" when you are an international superstar?

New York Magazine's Daily Intelligencer managed to snag an impromptu interview with designer, CFDA President and all-around Wonder Woman Diane von Furstenberg, and the clever minx managed to tell them almost nothing we didn't already know! As for the Fashion Week tents, she has a dream location in mind, but won't jinx it by revealing it too soon. The tents have gotten another one-season reprieve, and will probably rise one more time in Bryant Park this fall. She also smartly avoided endorsing any Presidential candidates beyond saying she would vote for the Democrat. What she didn't mention is that her 14th Street retail palace is scheduled to finally open sometime in April
The Exquisite Vagueness of a Conversation With DVF (NYMag.com)

Model Missy Rayder has chowed down with the folks at Grub Street to prove that models do eat, and she in particular eats, like, a lot! The Wisconsin born veteran mannequin (and sister of erstwhile Supermodel Frankie Rayder) chronicled a week of her meals, and we could only hope to eat so well. More impressively, Missy has been steadily working for the past ten years and is long past her teenage years. Rayder, it seems eats just about everything including ice cream and french fries. “I switched a long time ago from my days of drugs to food,”she says. Probably a good move. We love her...and we hate her a little, too.
Model Missy Rayder Drinks Garlic and Eats ‘Dragon Bowls’ (Grub Street)

The Daily reports that Saks Fifth Avenue is in talks to finally open a Chanel apparel boutique  on its soon to be redesigned third floor. This has been a longtime effort as the flagship has been selling Chanel shoes and accessories for several seasons, but the prestigious ready-to-wear has eluded them. They have Chanel boutiques in other locations, but the French brand is one of the most difficult to work with in terms of limiting distribution. The only retailer who sells Chanel in Manhattan is Bergdorf Goodman who routinely sets records with their business in the label. Barney's was not allowed to carry it in Madison Avenue store, and when their Seventeenth Street location was shuttered, they found themselves out of the Chanel business. The question is whether or not Chanel is ready to expand their distribution beyond Bergdorf's, their 57th Street and SoHo freestanding stores, and their relatively small leased shop in Bloomingdale's. A Chanel shop-in-shop would be a coup for Saks and a vote of confidence for the beleaguered store who was finally able to report positive sales increases for the last quarter. Maybe that new/old logo was the charm they needed to spur a turnaround.
Saks Snags Chanel? (The Daily)