AT THE URBAN STRIP MALL:

What To Know About Target
In East Harlem 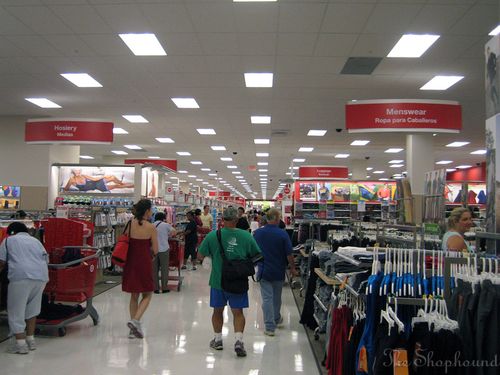 Yesterday morning The Shophound took two buses to 117th Street and he FDR Drive to check out Manhattan's first, much ballyhooed Target store.

Now, we like Target as much as the next person. It's terrific for what it does, and we can report that this location is spacious, tidy, well stocked and full of exactly what you expect to find in a Target. And that's about it. The staff was courteous and helpful, as they should be, and even though a few shelves and racks had already been picked clean, workers were restocking efficiently. We could go on and on about the 19¢ bananas, which were slightly overripe and exactly the same price as far fresher ones at Trader Joe's, or the exclusive collaborations which, though appealing don't always quite live up to what you hoped they might look like. For every surprisingly impressive Liberty of London extravaganza, there seem to be three lines

like last year's disappointing Rodarte collection. Yecch. In fairness, the Isabel & Reuben Toledo and Stephen Burrows collections created to celebrate the new store looked charming and fun, and may be worth going out of your way for if you are so inclined. The best we can say is that the store was exactly what we expected, which, in the scheme of things, is actually pretty high praise for a company with about 1,200 or so stores for whom consistency is always a high priority. At the risk of sounding like a spoilsport to everyone out there gushing about it, it's a very nice Target store, but there are no big surprises here. The most welcome development is the vast number of cash registers for checkout, a lesson everyone seems to have learned from the succession of Whole Foods that have opened in Manhattan over the past 10 years or so. The fact that this celebrated Target is tucked away on the edge of East Harlem, however, means that it is barely even in Manhattan, and like its neighbor, Costco, still very much out of the way of most of the borough's residents. In fact, we are still debating with ourself about whether or not it is more convenient to take a 45 minute ride on two buses to East Harlem, or a relatively speedy trip on the 2 or 3 train down to Atlantic Avenue in Brooklyn to the Target we have been visiting occasionally for the past few years —and Shophound HQ is in the West 90s. If you are in lower Manhattan, the place might as well be in the middle of the Bronx.

It's not for nothing that the place is flanked by an immense parking structure. The East River Plaza is still best accessed by your own car. Like your basic suburban strip mall, it is a collection of chains, but in its unique configuration, the stores are stacked atop one another instead of sitting side by side. If you for some inexplicable reason would want to visit Bob's Discount Furniture, you simply park on the top level for optimum convenience. 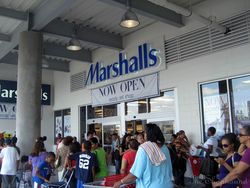 It's worth noting that Sunday also marked the opening day for a new Marshalls, also on the top level. Lacking Target's advertising might, this store was promoted at its entrance by a radio station contest featuring a spinning wheel and an emcee with a bullhorn, a real delight for the ears. Still, it managed to attract its own enthusiastic crowd, and The Shophound was curious to see exactly what the distinction was between Marshalls and its sister store, the rapidly proliferating T.J.Maxx. We remain curious. Aside from a somewhat smaller store format, they seem to carry the same goods, though Marshalls appears to be somewhat more focused on women's fashion —and we are using that term very loosely here— and lacks some of the high-end wild cards that make the occasional foray into T.J.Maxx so worthwhile.

Will The Shophound be running back to East Harlem's Target anytime soon? We happily restocked our supply of aspirin, Band-Aids and other sundries while we were there, and it is indeed a pleasant place to shop, even with a weekend morning crowd, but we have no immediate plans for a return trip. It is still not exactly convenient, but should a Target appear somewhere nearby, or even downtown where we often find ourselves, then that would be a very different story. 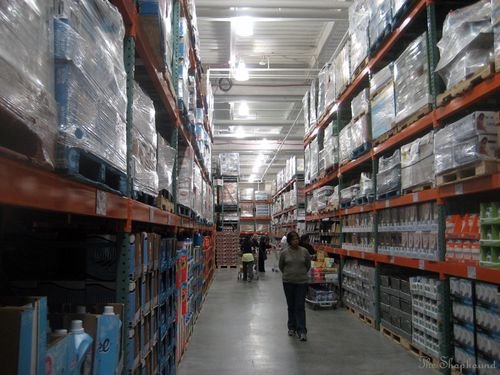 We have to admit that The Shophound had never actually been inside a Costco before last week, but we had heard tales of the tasty baked goods and giant, mutant jars of mayonnaise, so we set off to investigate the highly anticipated branch that has just launched the East River Plaza big box shopping complex. Making our way across 116th Street, we found ourselves in a quiet, almost genteel part of East Harlem and then, suddenly, a gigantic parking structure appeared and we were whisked to suburbia on the edge of the FDR.
Of course, you can't go into Costco unless you are a member (minimum $50). One would think that might be a steep entry fee for the neighborhood, but there was still a small crowd of eager future shoppers outside the store last Friday ready to pay up, get their cards and start shopping. We let our curiosity get the better of us, and soon had our own Gold Star membership card along with a $10 promotional gift card to lessen the sting, and in we went to the immense warehouse store. First of all, we must report that the Chanel handbags that bloggers were buzzing about last week were nowhere to be seen —either sold or possibly pulled at the request of a famously litigious brand, perhaps?. There were a few Tod's, Burberry and a single Ferragamo bag in a small case near the entrance, but if you think that Costco is a bonanza of designer bargains, then you will be sorely disappointed. We're not sure where these bags came from (or the single Rolex and Patek Phillipe watches, for that matter), but these things are not Costco's stock in trade.
We were initially struck by the randomness. We shouldn't expect careful store design in what is literally a warehouse, but one minute we are looking at TVs, then around the corner it's pots and pans and then towels. All these arbitrary items were peripheral, however, to the main departments, which essentially consist of your supermarket and drugstore on steroids. Keeping us entertained and fed as we tour the immense store was an abundance of sampling tables placed at the end of nearly every aisle. The fresh faced and cheery staff clearly had not yet become accustomed to the voracious free-sample habits of New Yorkers, and we were merrily encouraged to try some ice cream before we had even made it to the end of the aisle (as if we ever need encouragement to try ice cream). After tasting penne alla vodka, antipasto, confit of duck, roast pork, potato chips, goat cheese, chicken salad, tiramisu and apple pie to name just a few, we were full, and left to ponder how Costco could possibly fit into our usual consumer activities. 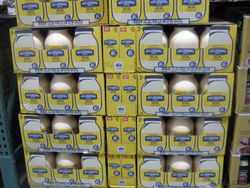 Sure, those baked goods are tasty, and we might want to buy a muffin, but we probably won't be needing 12 at a time even if they amortize out to about 53¢ each. This is the store's appeal and at the same time its drawback. We couldn't possibly use the famous brobdingnagian gallon jar of mayonnaise, let alone the three packaged together as a unit, but that's what Costco is all about. We don't think we could even fit those jumbo cereal boxes in our tiny New York City kitchen cabinets at all, and then there's the challenge of getting all those huge packages home. 117th street and the East River is not especially convenient to the subway, and imagine dragging those huge boxes on the bus. Oddly, there's little selection by brand within each category. Want mayonnaise? It's the giant Hellmann's or nothing, and so on.
Ultimately, we can see how Costco would be a boon when you're having a big party, have a highly populated household, or simply have the room to store 20 rolls of paper towels until you need them. Otherwise, now that Costco is here, we can't really imagine when we might need to go back before our yearlong membership runs out —yes, you have to renew every year.
Did we find anything for ourself? Yes, a package of 18 Scotch Brite scrubbing sponges. You can never have too many of those. They efficiently used up our $10 gift card, and we could carry them on the subway without much trouble.
Costco 517 East 117th Street at the FDR Drive, East Harlem It's not its first try to get a Manhattan store built, but Costco has succeeded in securing a site in Harlem. The big box club retailer, beloved in the suburbs, has finally been issued the variances required for the nighttime deliveries it needs to operate, and will officially assume the spot that once belonged to Home Depot in the East River Plaza development rising on the FDR Drive between 116th and 119th Streets.
Is that a little too far out of your way? Would a Target add to the attraction? Between those two giant draws, we expect East Harlem to be the new shopping destination by the end of the year when these stores are expected to open.
We'll be there for sure.
First Manhattan Costco in Forest City’s East River Plaza (NY Observer)

Alex K Goes Shopping: Alex Takes the "A" Train to N in Harlem

This week in The New York Times' Thursday Styles, our fearless consumer Alex Kuczynski makes her way uptown to Harlem. We've got to hand it to Alex. She has been getting more adventurous these days, and still manages to retain her peculiarly twisted perception. Her irrelevant association this week is that shopping in Harlem makes her think of none other than Oprah.

Isn’t it strange that no one, as far as I know, has remarked on the luxury-adoring habits of America’s most down-home, up-by-her-bootstraps black woman as she communes with America and tries to be a regular person?

Well, actually, people comment on it all the time. And her fans love it. What they like (and our Alex could take a note here) is that Oprah makes no false pretenses about the fact that she is one of the wealthiest women in America. She is no regular person. She is the queen of her domain, and only BFF Gayle King has the power to knock her down a peg once in a while. Why shouldn't she shop at Bergdorf's (or as she might say it, Bergdorf GoODMAAAN!)? She can afford it.
But back to Harlem, and N, a boutique on West 116th Street, that we are guessing Oprah hasn't made it to yet. According to Alex, Bloggers went crazy when this store opened. (Hmmmm...Alex reads blogs?)

More after the jump