Karl Lagerfeld's Bleecker Street Pop-up Is Only Virtual
Until Tomorrow 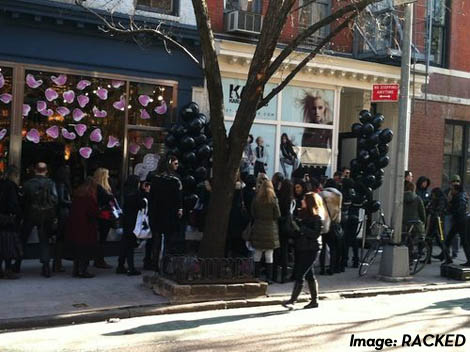 We're going to go out on a limb and say that Net-A-Porter was just a bit misleading in their press release on Tuesday, because they didn't fully explain that the pop-up shop on Bleecker Street launching Karl Lagerfeld's new KARL line would not be featuring actual merchandise. Silly us, we thought that if you launched a collection at a storefront on one of the city's favorite shopping streets, that there would be goods to buy.

Our friends from Racked tell us that a long line of shoppers descended on the store yesterday morning, and the first 50 people in line got gift bags with items from the collection as promised, but when the shop opened, it was only a display allowing visitors to win items from the collection by using the KARL mobile app and pointing their iPads or iPhones at the window. Net-A-Porter staffers were on hand with iPads to assist the non Apple-equipped, but there was nothing to actualy buy and carry away at that time. On the plus side, they reportedly had hot beverages, so ...free coffee for those who didn't win anything?

You can buy it online at Net-A-Porter right now, and Racked promises us that the shop will start offering real merchandise live tomorrow, Friday the 27th of January, so you will still have your chance to shop KARL like a regular, old fashioned tech-free customer this weekend. 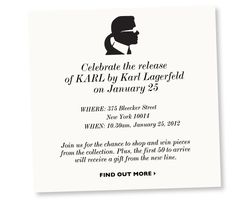 Net-A-Porter.com will be launching the new KARL by Karl Lagerfeld collection online tomorrow, but to garner a little extra bit of buzz, the luxury e-commerce giant has chosen five international cities to sell the line live and in person, and guess what? One of those cities is New York! Starting at 10:30 tomorrow morning, the collection will be available at 375 Bleecker Street, and the first 50 customers will receive a special gift from the collection. The other lucky cities are London, Paris, Berlin and Sydney. In case you were hoping to catch a glimpse of the Kaiser himself, you will have to get up really early and jet off to Paris which is where he will be making his public appearance, but one lucky winner in each city will be awarded a $1,500 shopping spree, which is roughly equivalent to half a Balmain jacket.

To win the loot, you need to download Net-A-Porter's KARL game and play it, putting yourself in the running for the shopping spree, but even if you don't hit that particular jackpot, just console yourself that you are in the only city in America where you will be able to buy the collection in a shop and take it right home without waiting for the UPS truck, or, if you are particularly extravagant, Net-A-Porter's pampering white glove hand delivery. There's always something to be said for instant gratification!

The uneasy marriage of the Karl Lagerfeld and Tommy Hilfiger brands is making another go at it. This time, they will be launching a denim collection for men and women called simply K. The line will make its debut for fall 2007, but will initially be sold only in Europe and Canada. No  U.S. distribution appears to be planned at the moment, as Hilfiger executives want to

establish the line in Europe first. Lagerfeld is collaborating creatively with Maurice Ohayon, the man behind the Notify label, and while the collection won't be shown until January, he gave Women's Wear Daily a strong hint as to the line's direction," I hate baggy pants: Don't expect them from me." On a related note, the designer has also been busying himself with legal matters. He is suing Alicia Drake, author of "The Beautiful Fall: Lagerfeld, Saint Laurent, and Glorious Excess in 1970s Paris " which focuses on the rivalry between the two designers. He is seeking $45,000 in damages for invasion of privacy, as the book includes lurid details about Paris' fashion set at the time as well as personal information about Lagerfeld and his family that the designer has disputed. Clearly he is unbothered by the enormous amount of free publicity he is giving the book.

Karl We Hardly Knew Ya, & Other News

After much fanfare and barely enough time to succeed or fail, Apax Partners, the new owners of Tommy Hilfiger, and thus Karl Lagerfeld have decided to pull the plug on Lagerfeld's eponymous, New York based contemporary collection. Fall, the first full collection, will also be the last. The Prêt-à-Porter collection will continue to be produced and shown in Paris, and we expect that the Kaiser should be able to keep busy with Chanel and Fendi. Having already given the axe to the H-Hilfiger label, we expect Apax will be putting their resources into trying to get people to buy Tommy Hilfiger again. Good luck with that.

Get your tracksuits ready! Juicy Couture is coming to lower Fifth sometime later this month. Expect a big bright "comfy happy and gorgeous" (their words, not ours) store at 103 Fifth Avenue with lots of velour and denim, but hopefully none of that lead-filled jewelry!

Union Square Wines & Spirits has moved because the 4,000 square ft. space is about to become a Puma store, well, at least in time for Christmas. Soon we will be able to bypass the teeming mass of humanity that Broadway below 14th Street has become. Now, if only they will start making our beloved Avantis again.