Lord & Taylor Does
The Executive Shuffle 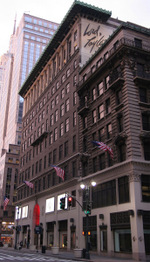 Change is afoot at Lord & Taylor.
President and CEO Jane Elfers is set to be replaced by NM Direct President Brendan Hoffman as parent company Hudson's Bay Trading Co. exerts more management control over its newly organized divisions. The Bay was acquired  last July by L&T's parent NRDC Equity Partners who is reorganizing its retail properties under the aegis of the venerable Canadian chain. Lord & Taylor will now fall under the purview of Jeffrey Sherman, CEO of HBTC, who is said to be taking a more direct role in management of all the chains.
That leaves Elfers out of the picture, despite the much admired job she has done, first in distinguishing Lord & Taylor from its more moderate siblings as part of the May Company, and later upgrading the store's image and assortments in efforts to escape its reputation as a staid, promotional department store.
There is still plenty of work to be done at Lord & Taylor, not the least of which includes a much discussed renovation and reconfiguration of the chain's Fifth Avenue flagship.
Let's hope that the new organization will complete L&T's much anticipated turnaround smoothly.
Elfers, Weikel Are Out at Lord & Taylor (DNR)

Restaurant Swap at Lord & Taylor:
In With Sarabeth's - Out With An American Place

The folks at Lord & Taylor continue to make savvy decisions regarding the revival of their historic Fifth Avenue flagship store. While, to The Shophound, eating at Lord & Taylor will always conjure up images of The Bird Cage (the restaurant, not the movie) with it's elaborate decor of cages and exotic stuffed birds and a fluffy coconut cake for dessert, in recent years the culinary role has been filled by celebrated chef Larry Forgione and his signature restaurant, An American Place. Recognizing that Forgione may have been getting lost in the vast department store, The New York Times tells us that his restaurants will soon be replaced with one of New Yorkers' favorite restaurant chains, Sarabeth's Kitchen. So far, there is no word on the resilient Mr. Forgione's future plans.
We couldn't possibly think of a better way to drive repeat traffic down to Lord & Taylor. Sarabeth's is now poised to go national as they will replace restaurants in other L&T branches over the next two years.
Off the Menu (NYTimes, 8th item)

Lord & Taylor has announced a plan for the overhaul of its historic Fifth Avenue flagship. Chairman of  L&T and now Fortunoff parent NRDC Equity Partners, Richard Baker announced plans to convert two floors into  a home department. Most had speculated that the flagship would be downsized with the vacated floors being turned to office space, however, the recent acquisition of Fortunoff now gives the chain easy entrée into a business it abandoned decades ago, and allows it to compete on a more even field with Bloomingdale's and Macy's.
In addition, Fortunoff will also take over Lord & Taylor's leased jewelry departments this February when their current operator's contract expires. We're not sure if any of these new departments will be co-branded with Fortunoff. While NRDC would probably love to have that kind of exposure for their new but troubled acquisition, we tend to think that L&T would be far better off as brand if the lease arrangements remained invisible to customers.
It's really all up to Baker and Jane Elfers, the chain's president and CEO. Fortunoff's home furnishings departments are to be tested in suburban Lord & Taylor branches before they are implemented in Manhattan, but we are really looking forward to see how the main store finally gets re-configured. There's no store in the city that needs it more.
L&T Considers International Growth, Fifth Ave. Flagship Renovation (WWD)

After we hit BCBG over the weekend, we figured we would walk a block or two south and see how the revival of Lord & Taylor was coming along, particularly to see how Tuleh designer Bryan Bradley's exclusive collection for the store had turned out. All we could find of the line, called Bryan by Bryan Bradley, was the chiffon trimmed knit cardigan and dress ensemble pictured above which totaled about $500 for both piece. In a Tuleh-ish sort of way, it could look winsome and feminine on the right lady and prim and schoolmarmish on the wrong one.
That was it. Not much to judge from.
Either everything else was sold out or they are starting slow. We could find nothing of the line on the store's website, so perhaps they are shooting to launch it big for Holiday.
As for the rest of the store, most of their other big initiatives have yet to be implemented, although they have clearly made an effort to reduce clutter on the sales floor and upgrade their displays and visual merchandising. A mobbed women's shoe department proved that the store could still attract a crowd, but the remodeling and renovation the building desperately needs have not yet begun. We will be keeping an eye on them, however. This is one turnaround that the entire fashion industry is rooting for.
Previously: Lord & Taylor Signs Tuleh's Bryan Bradley and Starts Looking Interesting

WWD reports that all of Lord & Taylor's heavy rebranding and remerchandising initiatives will start to take effect for the Fall and Holiday seasons this year. Store results have been improving and new efforts to build a contemporary business have been successful, so this Fall will see the full launches of in-house collections from Tuleh's Bryan Bradley and Cynthia Steffe as well as a dramatic increase in other exclusive items throughout the store. New owners NRDC Equity Partners will launch refreshed advertising, shopping bags, and even credit card designs. The Shophound is rooting for the iconic store to prove all the naysayers wrong who had pronounced the store near death. No word yet on renovations and reconfigurations for the Fifth Avenue flagship, but we expect they will follow soon.
L&T's Fall Season Seen Key To Store's Revamp (WWD)
Lord & Taylor (official site)

Frankly, we're a little tired of Alex Kuczynski these days having seen her make two visits to the Today show within a weeks time to promote her new book Beauty Junkies. Why does her upper face seem so suspiciously immobile and shiny as she proudly proclaims herself to be Botox-free? And we're not sure what kind of points she thinks she deserves for returning to her natural hair color, a rich chestnut brown which even a 39-year old woman can usually only find with the help of a good colorist, and giving up nail polish, which is hardly the sort of willing self-mutilation that leads to a face like Jocelyne Wildenstein's, a Tara Reid plastic surgery nightmare media tour, or accidental death during face-lift surgery. We'll believe her when she stops shaving her legs and bleaching her mustache.
But back to today's Thursday Styles, and Alex's visit to Lord & Taylor.
Sadly, this week's report is missing the sort of bizarro reveries like last weeks kindergarten story, we are only treated to a sixteen year old memory of a woman who referred to B. Altman as Baltman's. It's hard to imagine anyone in Kuczynski's circle would be that ignorant, but it's a relatively minor infraction.

Lord & Taylor: Not Dead Yet

Although it may be dead to you, it isn't to NRDC Equity Partners who have bought Lord & Taylor for a mere $1.195 billion. We'll bet you didn't think it was worth that much. Although every real estate consultant and retail pundit insists that they will sell the Fifth Avenue flagship to build anything from office towers to luxury lofts, NRDC execs insist they will maintain the location that has led the chain since 1918. The historic building anchors a retail no-man's land at 38th and Fifth. While we have fond childhood memories of eating in The Birdcage restaurant (decorated with antique birdcages and fantasy birds. Coconut cake. Heaven), we haven't been compelled to shop there since May Co. sent the store careening downmarket in the 80's. Can the 180 year old nameplate be returned to its former glory to fight it out with Nordstrom and Bloomingdales? We and real estate developers everywhere will be watching.