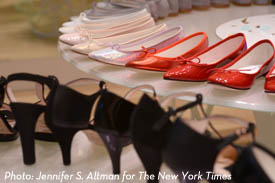 In today's Thursday Styles, this week's Critical Shopper Molly Young makes her way to Soho to check out the Repetto flagship or Mecca for generations of ballet flat fans. it is not, however, the eternal ballet flat that interests out shopper this week. She gives it its proper historical context (Brigitte Bardot, Kate Moss, Amy Winehouse etc.), and there are clearly lots of them to be had there for both professional dancers and civilians alike, but it is the other items at Repetto that really catch our shopper's eye. The well priced sportswear gets its due, although it seems a little bit too well-priced to have actually been made in France, but the item that sticks is a fawn-colored ankle boot. "It felt like having someone gently blow kisses toward my foot from a distance," she describes, which seems tough to resist, even for $425. And yet, the delicacy that makes it such a treat for her feet is also its chief drawback, How could such a dainty piece of footwear stand up to the rough sidewalks of New York? Of her trusty shopping partner she finally says, ". . .I’m grateful for friends who remind me of the important things in life — like keeping the maximum amount of shoe between me and New York City’s fathomless secretions," —perhaps finally remembering the heartbreak of having a new pair of shoes destroyed by the very streets of the city we call home. We have all been there.

Critical Shopper: Be a French Girl. Or Just Look Like One. By Molly Young (NYTimes)
Repetto 400 West Broadway between Spring & Prince Streets, SoHo

Patricia Field To Close Her Store After Nearly 50 Years 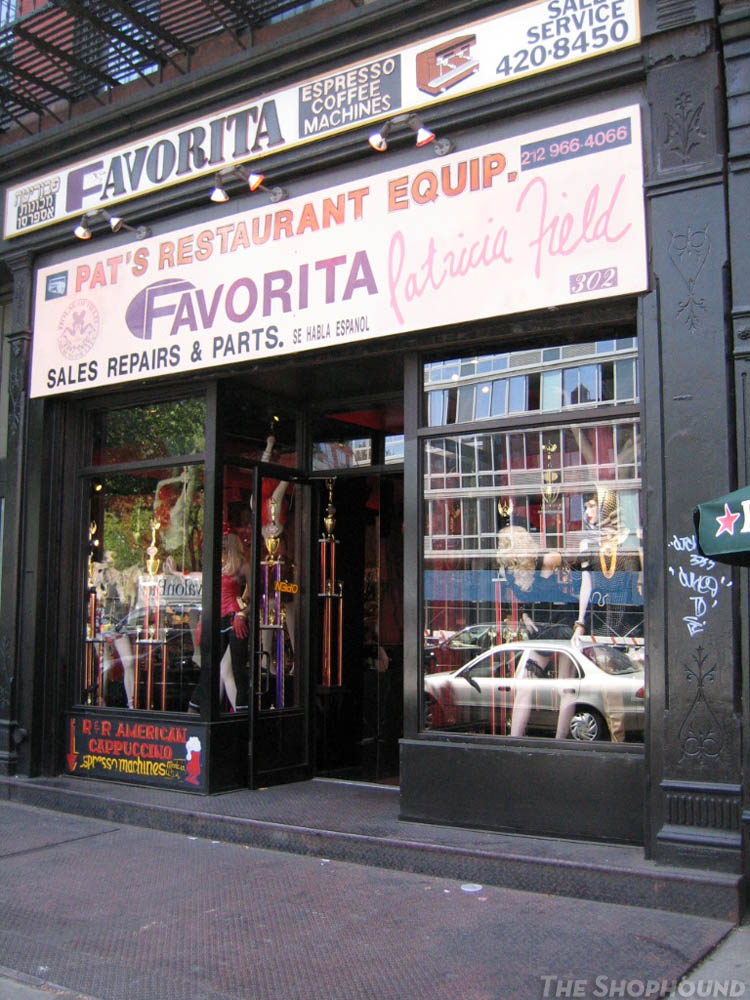 It's hard to imagine Downtown New York without a Patricia Field store, but we will have to get used to the idea next Spring when the ageless, flame-haired fashion fixture will shutter her eponymous boutique. When she closes the store, it will have been just about 50 years since its founding in the West Village in swinging 1966. The store settled on East 8th Street in 1971 and remained there to wardrobe flamboyant dressers and clubgoers through the eras of Studio 54, Area, Pyramid, Palladium, Twilo, Jackie 60, and beyond. In 2006, she moved her store to the still-gritty Bowery, and during her decades as a cutting-edge retailer, Field has supported many an outrageous indie designer, launched her own House of Field label and provided day jobs and nighttime outfits to more fierce ruling New York drag queens than we could begin to count. Hers has been a store like no other —a funky and fantastical celebration of style for customers who have been fearless, eclectic and just a bit kinky. It's the kind of place you can count on if you have decided that you needed a pair of  shiny patent leather leggings, a crystal festooned showgirl outfit, or maybe just another feather boa. When Field started garnering acclaim for designing costumes for Sex and the City, her store became something of a tourist attraction as well, spawning a satellite store in SoHo The TV and film work she started during the 1980s has only been growing steadily since. Field is not closing the store due to a rent hike or some other real estate pressure. She owns the now highly desirable space herself, but running a retail store for five decades can exhaust even the tireless, and the time she gains will allow her to take advantage of the opportunities that have come her way that she has had to turn down in recent years. We may still see her shopkeeper's touch at the occasional curated pop-up shop like the one currently found at Dover Street Market. “I’m going to miss my clients, the face-to-face time with them, the most. I make people look beautiful and feel happy, and I’ve been fortunate to make a career out of that,” Field tells the New York Daily News. While she will leave a niche that will be very difficult for someone to come and fill, her work as a costume designer, currently for TV Land's Younger and multiple film projects, continues to go strong, and faithful customers can look forward to next Spring when Field will empty out her stockrooms and warehouse for a blowout closing sale that should be as good for people-watching as it will be for bargains, if not better.