Rodarte To Team With & Other Stories Next Spring 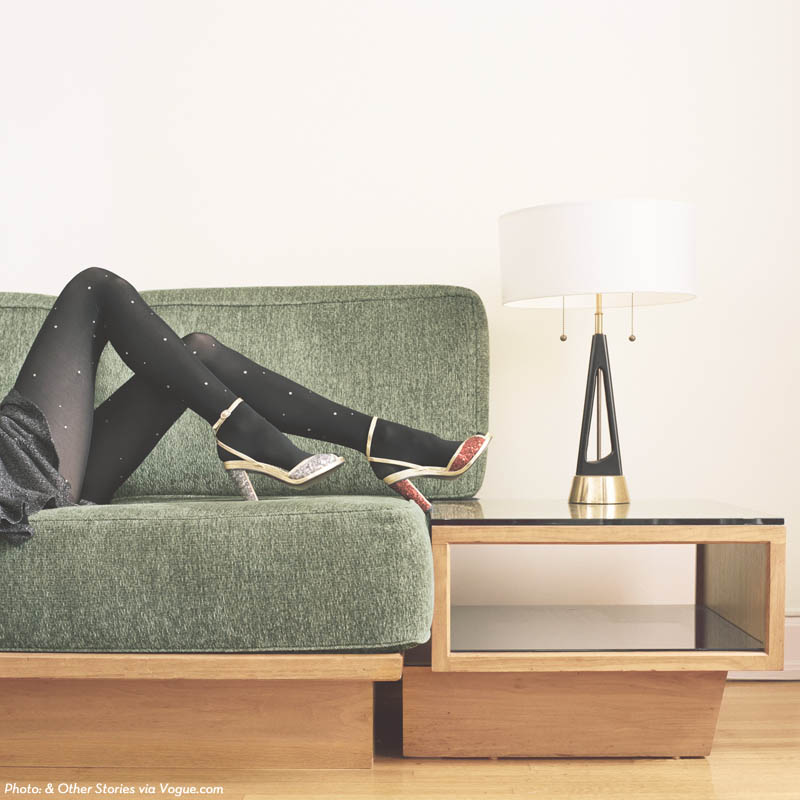 With the chain's second New York store set to open on Fifth Avenue in a couple of weeks, H&M-owned retailer & Other Stories is confirming its position as the quirky new contemporary chain to watch with an announcement that it is collaborating with the Rodarte label designed by sisters Kate and Laura Mulleavy for a capsule collection to launch in Spring 2016. It will be the chain's 16th designer collaboration, and the Mulleavy sisters' third team-up with a retailer to reach a broader audience. WWD reports that the collection will range from $29 for tights to $325 for a sequined dress. Though images of the collection have been kept under wraps, one exclusive teaser look at the line debuted on Vogue.com featuring some crystal studded tights and a mismatched pair of chunky, sparkly high-heeled sandals. The collection will include accessories and shoes as well as ready-to-wear.
“Through this special collaboration with & Other Stories, we are excited to translate the Rodarte narrative into a new environment. [The unique positioning] of & Other Stories in the fashion landscape has allowed us to create a truly special collection,” say the Mulleavy sisters in a statement released by the chain. The sisters got their first taste of collaboration with a capsule for Target several years ago, and then launched a more wide-ranging Rodarte collection with Opening Ceremony a few years later that looked like a stab at forging a more commercially lucrative future for the company. That line was discontinued after a couple of seasons, but it looks like & Other Stories might offer a better price point for the label to make more of an impact with a less expensive collection.

Posted at 12:34 AM in & Other Stories, Chanel, Designer Collaborations | Permalink | Comments (0) 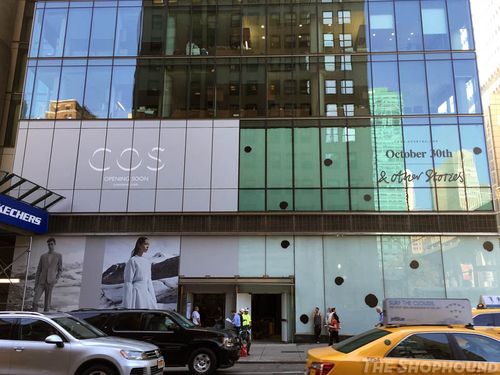 As an example of how the bewildering PR system at H&M sometimes works, let us remember about six weeks ago when it was officially announced that the popular contemporary chain COS would be opening its second U.S. store on Fifth Avenue in part of the space on the northeast corner of 42nd Street that had been quietly abandoned by H&M, its parent company. What would take the rest of the space, we all wondered?
Well, no official announcement appears to have been made other than big sign in the window telling us that the other budding chain from H&M, & Other Stories, will be joining its sister for its second store in New York —and the entire U.S, for that matter.
We won't have to wait too long for the trendy chain's expansion. What must be a pretty firm opening date of October 30th is clearly included in the window, which makes this scenario a striking mirror of the stores' arrivals in SoHo when the more sophisticated COS was the first to be announced, but lagged months behind & Other Stories in actually opening to the public. On Fifth Avenue, COS is still "opening soon" which could mean this Fall, Christmastime, next Spring or just when they are damn good and ready.
We aren't complaining. We'll take more COS anytime whenever they want to give it to us, but now we know for sure that both of H&M's up and coming nameplates are on the road to expansion in New York and beyond. If the new stores are as well received in Midtown as they have been in SoHo, you can bet that there will be more of both coming your way soon. 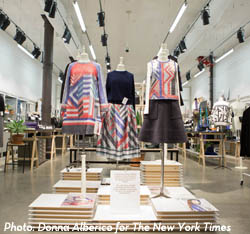 While the debut of H&M's contemporary women's fashion chain & Other Stories has been hotly anticipated, this week's Thursday Styles tells us that Critical Shopper Alexandra Jacobs is still missing the short-lived Guggenheim Museum satellite that briefly inhabited the building during the 1990s. Of course, the only thing The Shophound remembers seeing in that building was an Azzedine Alaïa retrospective, so maybe it's just as well that the building has long since been turned over to retail.
But back to the present day, when our shopper is plunging through the store's barrage of relentlessly upbeat slogans scrawled throughout the store, seeking to connect its wares with the notions that the clothes we purchase tell our personal stories. Perhaps they will inspire shoppers to spend a couple hundred dollars to join a community of storytellers in price-point-controlled fashion? maybe from a collaboration by an untested, relatively unheralded designer like Sadie Williams? Well, our shopper isn't buying it —well, she did, but she's not keeping it.

This did not make me feel “happy,” but on the contrary produced a hollow and aimless sensation, and so though I did buy one of Ms. Williams’s sweaters, from a cashier with a bold feather tattoo, I will probably take advantage of the store’s 30-day return policy and take it back.

Is the store trying to hard, or is the New York shopping sophisticate simply too savvy to fall for its chain store charm, not matter how genial and sophisticated? H&M's even more upscale chainlet COS still expected to open its doors a few blocks away before the end of the year. It is officially Opening Ceremony-approved, but we shall soon see if our shopper remains resistant to the fast fashion giant's forays into upper markets.

& Other Stories From H&M Opens Today In SoHo 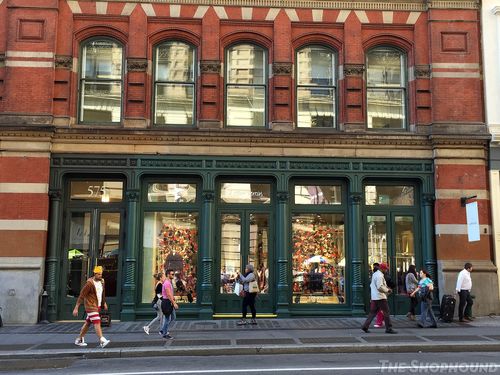 Shoppers anxious to see H&M's offshoot chain & Other Stories will have to wait no longer. The first U.S. store (pictured above) opens today at noon in the middle of a block of Broadway featuring Prada on one end and American Eagle on the other. For those who aren't able to make it into the store, the chain's e-commerce site also launches in the U.S. this week —a rare concurrent entrée into the retail scene. From what The Shophound can gather, the price range is on the upscale side of the chain store range, roughly equivalent to Club Monaco or J.Crew, and definitely a few steps up from H&M's fast-fashion category. How quickly & Other Stories will expand depends on public response, of course, but keep in mind that the chain made its debut less than two years ago in London, and then swiftly rolled out through Europe within months. We don't know if this is the plan in the U.S., but the quick opening of e-commerce here is a good sign that the chain is looking to gain prominence quickly. Word has it that when the website went live this week it crashed from the huge response, so the interest is definitely out there. At any rate, we will be able to see the whopping 9,400 square foot women's only store starting this afternoon. As for the other highly anticipated sibling store from H&M, COS, news has been quieter. Announced before & Other Stories and expected to be open by now, the even more upscale sibling chain has been taking its time, so maybe we can hope to see it for the Holidays? Spring?
Let's just appreciate what we got for today.

& Other Stories Finds A Broadway Address For Its First U.S. Store 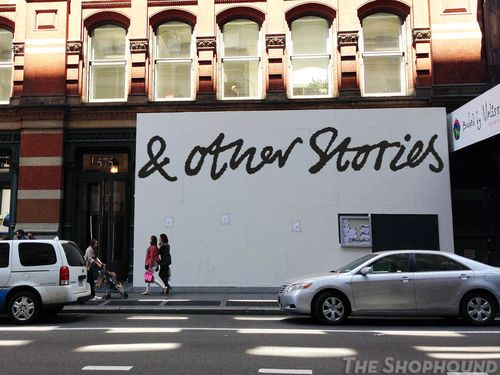 Though it announced the American arrival of COS first, it looks like H&M is giving its other burgeoning chain & Other Stories the premium location when it opens this Fall. The chain will be taking 10,915 square feet at 575 Broadway (pictured above with a logo we added ourselves), the historic building at the corner of Prince Street that also houses Prada. If we are not mistaken, it was also the site of Club Monaco's, temporary women's store last year. The space is on two levels, and stretches all the way to the back of the building, which could potentially allow for a second entrance at 142 Mercer Street like the one Prada has.

While the upcoming COS store at 129 Spring Street will be in a highly desirable location, it is the high profile frontage on Broadway that appears to put & Other Stories on a faster track for growth. The store will find itself one one of the city's most heavily trafficked streets, nestled amongst other big names that will give it maximum exposure not only among New Yorkers, but also the tourists who will be instrumental in bringing reports of the new chain back to other potential markets both in the U.S. and abroad. It is a strategy that has worked well for other imported chains like Sephora, Mango and Desigual, and even the mothership H&M itself. This is not to say that COS is already the stepchild getting short shrift. The chains are differentiated by a focus only on trendier, women's merchandise at & Other Stories and a more sophisticated, minimalist-inspired style at COS which offers products for Men, Women and Children and is currently the only one of the two chains to offer e-commerce in the U.S. The only question now is whether the store is far enough along in construction to to make its Fall opening date? COS was meant to open this Spring, and has officially been pushed back a season, though that could just be a result of the poltergeists and other ghosts said to haunt the location. As far as we know, there is no such supernatural activity at 575 Broadway, but if the site has just been identified, it might take some magical superpowers to have it ready for business in a few short months.

* That's a new photo of the site pictured above. We added the logo to the image, so it's possible that & Other Stories has been working on the store for a while under the anonymous cover of plywood

H&M's & Other Stories Heads To SoHo 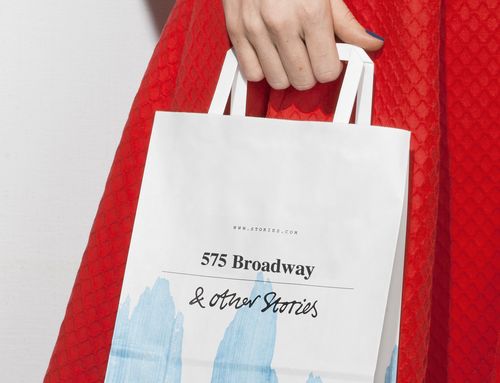 So many shoppers are disappointed that the first U.S. COS store has been pushed to the Fall, but the consolation prize is that H&M's other offshoot chain & Other Stories will be joining it in SoHo. New s broke to breathless fashion blogs today that though the fledgling chain is barely a year old, it has been deemed ready for a stateside launch. Already available in 10 European countries, & Other Stories will also be offering e-commerce to the U.S. along with the retail rollout. Where does this latest chain fit in with the hierarchy? Pricewise, it falls somewhere between the mothership and COS, so comparable to Madewell? Like J.Crew's offshoot, this one is for women only at this point, and will open its doors right next to Prada in 6,400 square feet at 575 Broadway according to the poromo image above. Stylewise, it has been compared to Acne Studios and Opening Ceremony's house brand, so we can expect a bit more of the quirky sportswear style that Stockholm has become famous for. Editors and international bloggers have been raving about the chain for the past year, so there will be plenty of excited potential customers by the time opening day rolls around. What with the massive Herald Center takeover, upcoming Fifth Avenue brand palace and these new launches set for later in the year, H&M is taking over Manhattan, and we haven't even heard about its big Fall designer collaboration —yet.

BREAKING: H&M's & Other Stories Brand Is Opening in NYC (Racked)