Holiday shopping at Sample Sales can be tricky. There are no returns or exchanges, but when you know you have found the right gift, it's worth the risk. Or maybe, you aren't shopping for gifts. It's OK. We can admit to a bit of shopping for ourselves during the Holiday season, and this year, we have an extra long stretch between Thanksgiving and New Years. Luckily, this week there are a few events that faithful bargain hunters anticipate every season.

Holding over from last week are AUTUMN CASHMERE, PONO jewelry and, for the more extravagant,NANCY GONZALEZ accessories, which are all good for gifts for oneself and anyone else on your list, but coming up, we have some heavy hitters.
On Tuesday, look for lines of eager shoppers outside two of 260SampleSale's main outlets. In NoMad, perennial fave RAG & BONE will be setting up shop on Fifth Avenue through the weekend with its usual mix of luxe sportswear, shoes and accessories for men and women. Down in SoHo on Greene Street, superstar DIANE VON FURSTENBERG will be offering discounts on her popular collections for the same time frame. One block west on Wooster Street find DEREK LAM sharing space with eyewear doyenne LINDA FARROW for their seasonal sales.

Well, that's a lot for any week, but Wednesday brings a two day WHITE + WARREN sale in the Garment District, three days of HANRO showroom samples on sale in the luxury innerwear label's midtown headquarters and a five-day FRETTE sale on Grand Street through the weekend. Thursday launches five days of ELIE TAHARI at Soiffer Haskin.

That ought to keep the city's community of sample sale shoppers busy enough, but some may want to hold out for the coming weeks when ISAIA, GHURKA, MARC JACOBS, ULLA JOHNSON and more will be tempting bargain hunters. Keep an eye on our SALE ROLL sidebar at left for hours, locations and any late-breaking sales. Happy Holiday shopping to all.

The RAG & BONE Sale You Know And Love Is Back And Starts Tomorrow + Whistles, Asics, Reem Acra & More 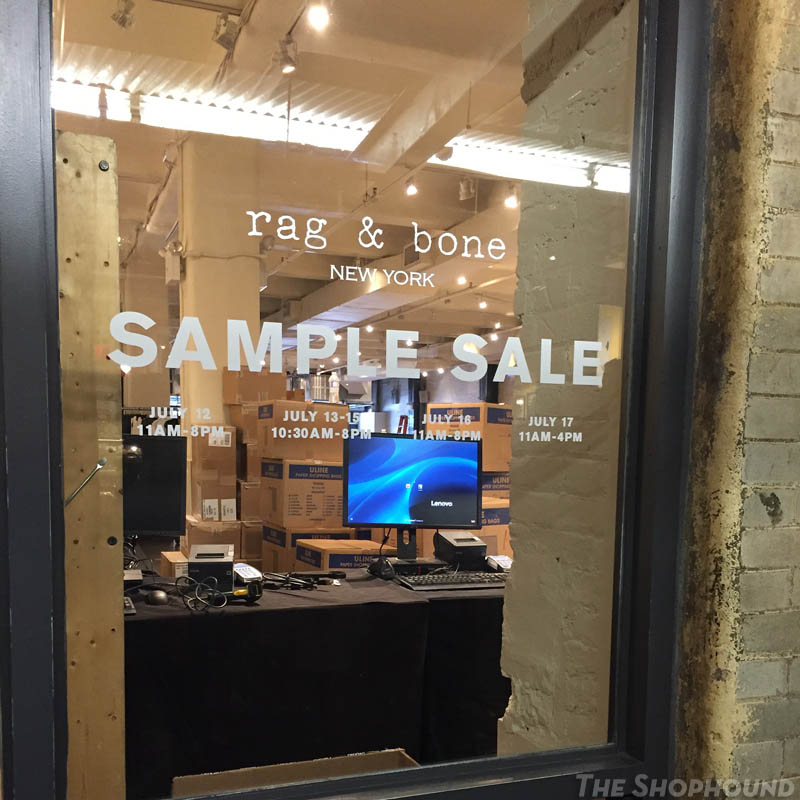 Just to show you how unpredictable the so-called off-season can be in the Sample Sale world, the somewhat frustrating RAG & BONE Sample Sample Sale is indeed coming back to the Chelsea Market where it belongs. To recap, earlier this Spring when the sale's usual week came and went, Sale watchers like us wondered what was up? The came an announcement that the label would have a Sample Sale in Los Angeles for the first time. We thought we had lost it altogether, and then the brand joined Steven Alan for an extension of his sample sale that was held in Brooklyn's Industry City last month. We figured, that was it until this morning when, while strolling through Chelsea Market, we saw the usual space being set up for the Rag & Bone sale complete with window signage.
So it's on, with savings reportedly up to 75% off. We have heard that tomorrow will be the official VIP Friends and Family day, though, perhaps recognizing that the door policy for that event has been porous at best over the years, the window simply list Tuesday's hours as regular (as seen in the image above), so it's likely that anyone will be admitted. Rag & Bone fans can finally heave a sigh of relief and shop the sale through Sunday.

But there are other things happening this week as well. British chain WHISTLES, currently making inroads in the U.S., will be taking over 260SampleSale's SoHo venue for a women's only sale starting on Tuesday through Sunday. Look for savings of up to 60% off.

Athletic brand ASICS will be returning to 260 Fifth Avenue on Tuesday with it's soup to nuts sale for Men and Women including workout and running gear and tons and tons of shoes.

Though June is over, there will be plenty of brides heading to REEM ACRA's midtown showroom on Fifth Avenue for deep savings on bridal gowns as well as* the designer's impeccable Ready-to-Wear collection. The sale last for two days through Friday and clicking here to RSVP is highly recommended.

Perennial favorite NYC designer CYNTHIA ROWLEY will be holding her Sample Sale on Bleecker Street from Thursday through Sunday featuring up to 70% Savings on her main clothing line as well as swimwear, footwear, accessories and those covetable one-of-a-kind items as well as past season's merchandise.

Starting on Friday up and coming cult brand BROOKLYN TAILORS will hold a two-day sale in its namesake borough featuring mostly men's apparel and accessories with a smattering of samples for women at savings from 50% to 75%.

Next week, look out for Thomas Pink, Intermix and other events TBA, so keep an eye on our SALE ROLL sidebar at left for locations, times and other details as well as late-breaking events.

*Correction:
Earlier we indicated that Reem Acra would be offering bridal gowns at her Sample Sale this week. This is not the case. Only the Ready-to-Wear will be offered at the sale —which still makes it a must for anyone in search of a great deal on some truly gorgeous dresses.

Rag & Bone's Sample Sale Is Happening, But Not The Way You Are Used To —And It's Tomorrow

Af there the announcement that RAG & BONE would be moving their sample sale to L.A., we, like a lot of other people, thought that we would be missing out on the popular brand's reliable sale this season, but it turns out that the R&B folks wouldn't do that to us faithful New Yorkers. The sale is happening, just not at its usual Chelsea Market location.
The brand is joining forces with STEVEN ALAN, who just held what we thought would be his final clearance last week in SoHo. Alan's sale will be continuing with deeper discounts to 80% off in Industry City, Brooklyn's current hotbed of development. Rag & Bone will be joining him with their sale. We have no idea whether or not it will be as extensive as what we are used to, but it's probably worth a trek out to Brooklyn to find out. Officially, it starts on Friday the 24th at noon, and we have no idea whether or not Rag & Bone's traditionally easy-to-get into VIP preview is happening today or not, but at least we know that the label hasn't forsaken its hometown sample sale shoppers just yet.

See the sale notice after the jump.

Rag & Bone's Sample Sale Is Happening, But Not The Way You Are Used To —And It's Tomorrow" »

The Rag & Bone Sample Sale is Moving
. . . To California?

There are a few things that we New York City sample sale watchers can reasonably count on. There will be numerous Theory and Helmut Lang sales. If there is an Hermès sale, then people will wait in a ridiculous line for it, and Rag & Bone will show up with a sample sale at the Chelsea Market every season like clockwork. Rag & Bone does have one of the longer running and most consistent sales, and they are going to have another one this month.
In Santa Monica.
Yes folks, Rag & Bone has moved its sample sale to the greater L.A. area from June 23rd to the 25th as you can see in the official flyer pictured below. We don't know that this precludes its regular New York sale, but we sure hope it doesn't. The sale is being promoted by Privé, which also tends to operate the sales in the Chelsea Market space that Rag & Bone usually uses, but it's only for three days which is a bit shorter than its usual NYC run. Typically, the sale here would be happening around now, but sometimes these designers like to break up the predictable pattern.
Call us cautious, but concerned. It's all well and good that L.A. should have some sample sales, too, but not at the expense of our New York schedule. There are a lot of New Yorkers who count on that sale to replenish our wardrobes of cool sportswear at a neatly reduced price. We will keep this issue updated as necessary. 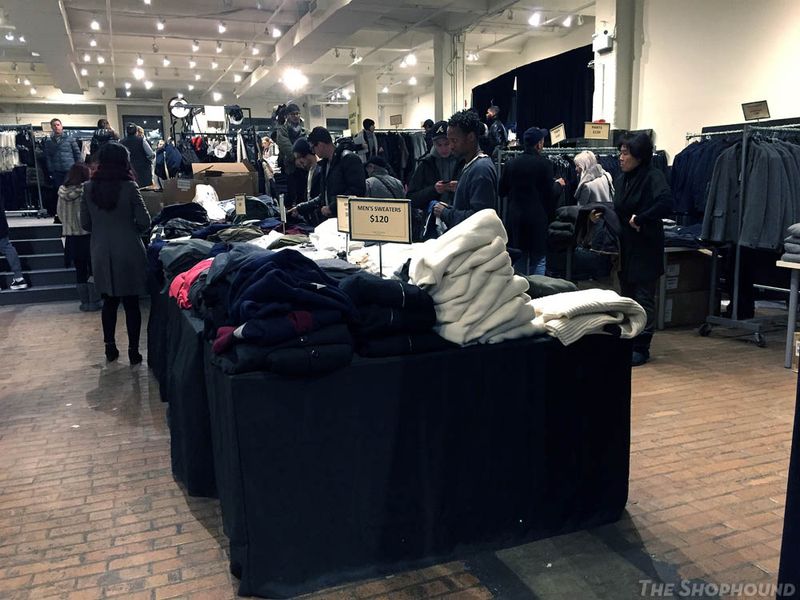 As if by request, shortly after we mentioned that the RAG & BONE sample sale had been MIA so far this season, it was announced to be beginning today at its usual Chelsea Market location. In fact this is around the same time it happened last year —even a bit earlier than last year. The Shophound stopped by yesterday afternoon for the preview day (which experienced R&B sale shoppers know is only loosely restricted) and found everything pretty much as expected, which is generally what is to be loved or not about the brand in general (pictured above). The long denim table was exactly where it always is. Mostly everything we saw fell into the black, brown, olive green or gray color category. There are plenty of great vintage or military inspired shirts (pictured below), knits and coats, with a particular abundance of men's pea-coats and a bit more of the kind of sports performance inspired separates in keeping with current trends. As of yesterday afternoon, the sale was still in the late stages of set-up mode, so there may have been more merchandise to bring out. Without going into granular detail, prices seemed to be around 60% to 75% off retail depending on the item's original retail price, so Rag & Bone on sale costs perhaps just slightly more than J.Crew at full price. Fans of the brand should make haste to get themselves down to Chelsea. The first day is generally a madhouse.
While KIKI de MONTPARNASSE will continue its warehouse sale through the weekend, the only other sale of note we discovered this week is  what is being billed as a JEAN PAUL GAULTIER Farewell To Ready-To-Wear sale which is beginning tomorrow at Century 21's Upper West Side location in Lincoln Square through Sunday the 17th. This is a new venue for Century 21's recent foray into sample sales, and it promises vintage and collectors' pieces from the celebrated French designer who recently ended his prêt-à-porter line in favor of concentrating on his Haute Couture and fragrance businesses. We are not quite sure what to expect from this sale, but it sounds like an intriguing option especially with few other sale events  happening.

Be sure to check our SALE ROLL sidebar at left for details, locations and any late breaking sales.
Next week, SEIZE sur VINGT's popular sportswear and haberdashery sale begins with an online preview starting on Tuesday. 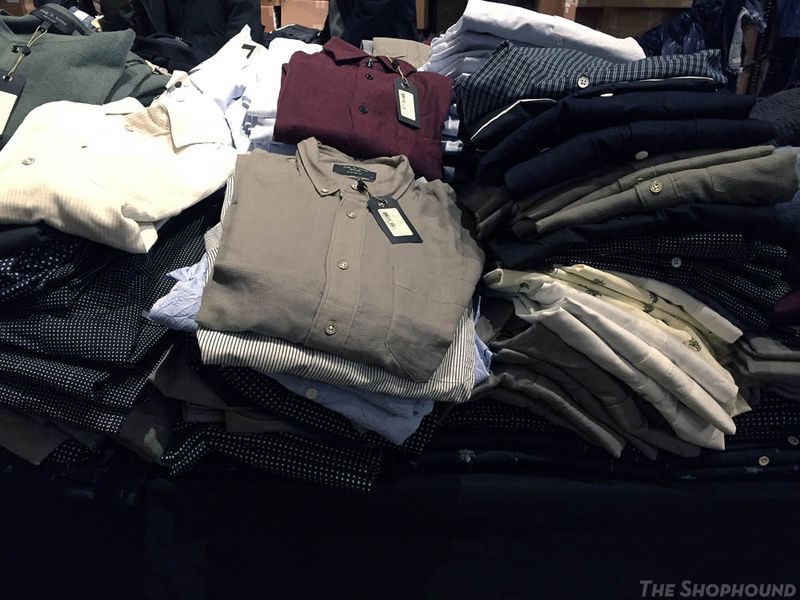 Posted at 08:58 AM in Chelsea, Rag & Bone, SALEsaleSALEsaleSALE | Permalink | Comments (0)