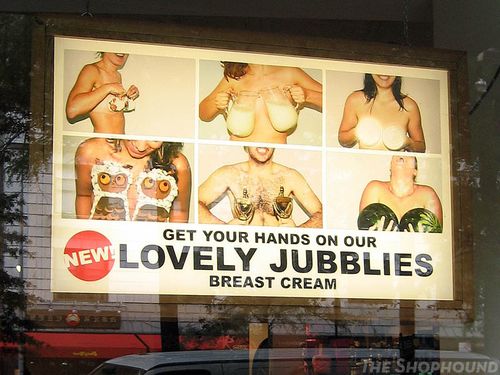 Click the image for larger boobs in a new window
Considering the uproar that American Apparel's risqué advertising used to cause, we are kind of surprised that we haven't heard any complaints about the windows we saw recently at Lush, the natural cosmetics chain that has sprung up all around the city over the past few years. They've got that AA girl-against-white-seamless-with-a bright-strobe look, and there's a pointed emphasis on the models' barely covered bosoms to promote the brand's Lovely Jubblies breast cream. So how, when American Apparel's scantily clad strumpets have raised community hackles on so many occasions, does Lush able to get away with its topless sextet with nary a whimper that we have heard about?

Is it the humorous yet juvenile reference to jugs, headlights, hooters and watermelons that excuses the image? Even the token male (or very hairy flatchested female) holds up a pair of door knockers. (Get it? Knockers!) Maybe it's just the wholesome context of personal care and maintenance instead of AA's louche "hey look at my ass" aesthetic that makes the imagery seem so innocent. Perhaps we are unbothered because we don't know of a pervy, slightly unhinged CEO behind the scenes shooting the ads at Lush.

Mind you, it takes a lot more than some barely covered breasts to offend The Shophound, but we discovered this window display smack in the middle of the stroller clogged, family friendly Upper West Side where would have thought it might raise an eyebrow or two. If this all means we now live in an enlightened, prude-free society, then we are all for that, but we think Lush is just flying under the radar here.

Critical Shopper Cintra Wilson returns home to Manhattan this week with a special Pre-Valentine's Day edition in today's Thursday Styles. Playing swanky lingerie dealers Agent Provacateur and Kiki de Montparnasse off each other would naturally provides endless opportunities to exercise her dry wit, comparing the haute erotica vibe at Kiki with the rockabilly pinup atmosphere at Agent, with both of them being a far cry from the homogenized soft-core flavor of Victoria's Secret. Her real accomplishment here is in pushing the boundaries of propriety in the Times, including a discussion of Ben Wa balls that is somewhat more descriptive than what one usually finds in the paper. If you are unfamiliar with the various uses of this item, we are certainly not going to walk you through them, although since you are obviously familiar with this internet thing, you can easily find out for yourself with a few keystrokes (hey, that's what it's really for, isin't it?).
The most surprising revelation here is that the staff at Agent Provocateur will, apparently happily model their wares for those too timid to try them on themselves.

I inquired about the price of a ladies’ tuxedo jacket, since I couldn’t find the tag, and learned that the jacket was not sold separately from its matching black satin teddy ($1,700).
“Would you still like to try it on?” one of the tattooed ladies asked.
“I’d rather see it on you, actually,” I replied.
She very sweetly and immediately obliged.
I inspected the peplum and the Balmain-esque shoulder pads. “It’s a very small size, isn’t it?”
“Well, I’m a 32D, so it fits great,” my helper said in response.

Somehow, we suspect that this may start to attract an unwanted sort of customer to the shop, but then that's probably something of an occupational hazard at the lingerie shop anyway.
Critical Shopper | Kiki de Montparnasse and Agent Provocateur: Dressing for Success on Valentine's Day by Cintra Wilson (NYTimes)
Kiki de Montparnasse 79 Greene Street at Spring Street
Agent Provocateur 133 Mercer Street at Prince Street, both in SoHo

Victoria's Secret has become so ingrained in our culture that it we hardly noticed that over the years, they have turned the risqué image of a sexy lady in her lacy underthings into utter banality, at least that's the thesis that Critical Shopper Cintra Wilson proposes in today's Thursday Styles. VS has become such a behemoth that, for some time now, it has been they, along with Sports Illustrated, who anoint the new Supermodels, not Vogue or the world's designers. They seem to be singlehandedly responsible for making thong underwear acceptable attire on network television, or at least basic cable. They would ordinarily seem to be too easy of a target for La Cintra in attack mode, if only they didn't seem so deserving of her jabs. Sometimes a sitting duck is just begging to be shot at.

And she's off.
Of course, there's no commercial success without a willing public, but we can't help agreeing that they have taken what was once risqué and removed all the mystery. Of course, that sets them up for this:

Here is a store tailor-made for La Cintra to go to town, and she dutifully obliges. After all, Valentine's Day needs a little acid to cut all that saccharine.
Critical Shopper: Victoria’s Secret - Chug-a-Lugging Aphrodisiacs by Cintra Wilson (NYTimes)
Victoria's Secret (Official Site)

Calvin Klein is so well known for his provocative advertising that it's almost a cliché, but when we walked by his Madison Avenue Collection boutique, we had to ask, what's that all about?

Our main question would be, don't the helmets get in the way? Or is that part of the fun?

Employee Of The Week: Jennifer Duenas at Kiki De Montparnasse

New York Magazine seems to be going in an interesting direction with Ask A Shop Clerk these days. Last week it was all about beds with randy Ryan (the comments are where the action is on that one). This week, it's erotic lingerie with Jennifer Duenas at the luxe sex shop Kiki De Montparnasse in SoHo. We're kind of curious to see where they take this line of reporting.
Scores, maybe?
Jennifer, for her part, wants to make it clear that where she works is really more of a specialty lingerie store than a sex shop, and yet, our minds keep wandering to those toys,

Q-Is that a whip you’re holding?
A-It’s called the Tickler Two-way. I’m comfortable with every last thing we sell, but it’s not all about toys. We have lavish cashmere-silk tunics and leggings, skintight satin-and-jersey catsuits. We have this handcuff-print scarf. It’s like something Hermès would do. It’s … versatile.
Q-Who are your customers?
A-No one under 18. Not yet.
Q-Sexagenarians?
A-Yes. Our crotchless peekaboo panty sells best. And people love our dressing rooms, which comfortably fit two. You know what I mean? They also have dimmer switches, ideal for lone zaftig shoppers.

Wow.
Yes, we do know what you mean. Now we know what to get our elderly friends for Christmas.
Thanks for painting those pictures, Jennifer. We just hope it doesn't make for too long of a wait on a busy Saturday afternoon. We actually found the help at "Kiki" to be refreshingly helpful and professional when we visited a few months back. Clearly her job is not for the faint of heart, and acknowledging that she test drives the merchandise does underscore her expertise in her field, though the portrait of her holding the Tickler Two-way may underscore authority a little more.

What a week it has been for newly opened erotica emporium Kiki De Montparnasse! Not only did The Times Thurday Styles resident consumer Alex Kuczynski make her way there to file a report, but New York Magazine's Charlotte Druckman has made a handy graph chart comparing Kiki with the city's other upscale sex shops, the Upper East Side's Myla, and downtown stalwart, Babeland. We already visited two weeks ago, so we are forced into a bit of Cindy Adams style gloating, but just a little, as we want you to keep reading. It's been a big week for Alex Kuczynski too, what with the pre-publicity for her new book beginning. Earlier this week, we learned that she considered heself to be a "method journalist", so it was with trepidation that we approached her examination of an upscale sex store.
More after the jump

Kiki De Montparnasse: Taking The Raunch Out Of Kink

Most sex shops hide in the shadows, especially in post-Giuliani New York. They are usually in offbeat neighborhoods, so you can find them if you want to, but you wouldn't if you don't. Not Kiki De Montparnasse(NSFW), the new lady-centric sex shop on Greene Street in SoHo. No, they are right in a busy shopping neighborhood with the door held open by an appropriately shiny gold chain. As you may imagine, Kiki is not your average sex shop. Named for the stage moniker of Alice Ernestine Prin, the artists' model, muse and all-around it-girl of Paris in the 1920's and 30's, their website states:

Sure, no arguments over here. In fact you migh easily mistake the place for just a luxury lingerie shop, until you start noticing things...
More after the jump