This week's Thursday Styles marks another appearance from Cintra Wilson as the Critical Shopper, an encouraging sign that The Times is rethinking its decision to restrict the column to staff writers (either that or Ruth La Ferla is on vacation, but let's think optimistically). This week, she has been dispatched to the Ace Hotel to give its retail components the once-over. The tiny satellite branch of Project No. 8 is dismissed with a sentence, and the lobby scene is essentially described as a hipster Starbucks. Instead, she focuses on the mini-version of Opening Ceremony that serves as its main gift shop.

A person could go either way with this store. The uninitiated could easily see it as a collection of arcane luxuries, but our more sophisticated shopper recognizes it as a masterfully curated array if irresistible items "unified by an adventurous vibe of intelligent newness and otherness". So seductive is the store's atmosphere that the typically unflappable Wilson succumbs to the extravagance of an $89 T-Shirt by OC mainstay Alexander Wang.

I know what you’ll think, and you’re right: an $89 T-shirt is a crime against humanity, and people who buy them ought to be pelted to death with $18 stainless-steel water bottles.
But I kept coming back to rub my fingers on it. It was so soft, it was making my brain flood with dopamine, like a security blanket.

And really, who among us hasn't thrown caution to the wind once or twice for a pricey bagatelle that turns out to be worth every penny and then some?

Ha, I said, showing my new fist to the twinkling night, while closing the blinds. Behold, ye suffering fashionisti. Behold, ye sensibly fleeced. I sleep to conquer. I am my own anarcho-luxurist syndicate. I am the Golden Mean.

Well, damn! We need to get ourself one of those T-shirts like yesterday!

The Shophound In Los Angeles: So we're here in Los Angeles on vacation, but The Shophound is never really on vacation when there are bunches of stores around and we are in a strange new town. The last time we were in L.A. was about 10 years a go, and while some things have changed, a few things are the same. Drop us in the middle of West Hollywood, and we'll find our way to Ron Herman at Fred Segal by sheer instinct. We have a pair of Maharishi pants to remind us of the last time we were there, but how has the place held up after a decade?
We may not have caught the store at the best time, since they were going into their final clearance phase with a sidewalk sale and 50% off whatever was left, and 75% if you bought three pieces. Sale racks aside, we found the place to be mostly in its familiar mode of mixing sporty contemporary sportswear lines and denim downstairs with the more exclusive designer labels upstairs. The store still has a stellar lineup of labels (Margiela, Dries, Alexander Wang etc.), but many of the racks looked disturbingly sparse in places. Either they have already sold out of the best things, or their inventory was so tight that there just wasn't enough merchandise to properly fill the place up. It may well be a bit of both. The economy has hit L.A., and the extended writers' strike that preceded gave it a head start. There are lots of empty storefronts on Melrose.
If the goal of our shopping in L.A. is to find something we haven't seen in New York, Ron Herman succeeded with a selection of Comme des Garçons' Dover Street Market labeled sportswear and very California-ish limited edition line from Quiksilver among other things. If New York is stuck in a dark '80s revival rut, then L.A. stores give the look it a glossy West Coast sheen. 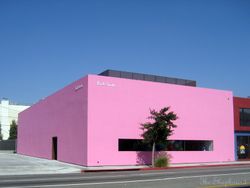 Where they failed was when they let us wander through the store for 10, 20, then 30 minutes without once being approached or acknowledged in any way.
One thing that struck us about L.A. was how many more New York stores have opened West Coast outposts since our last visit. So why would we want to visit Paul Smith here when he has two perfectly good shops in Manhattan? Well, for starters, it's hard to resist that great big pink box on Melrose, and once inside, the cavernous space offers a pleasingly different experience cleverly tailored to its locale despite having essentially the same stuff we see at home. All that extra space, it turns out, makes a world of difference. 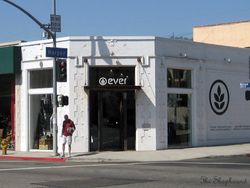 Of course there are also a few California based brands that have their own boutiques here, and its no surprise that a sporty label like Ever looks all the more appealing in its native environment.
It was further down Melrose, however where we found our first true shopping highlight. Cintra Wilson prepped us a few weeks ago in the Thursday Styles for our visit to Maxfield, one of L.A.'s signature stores. If any store can define the West Coast's peculiar blend of casual extravagance, it's this one. What can we say about a store that can successfully display shrunken heads and giant vintage Hermès Birkin bags within a few feet of each other? 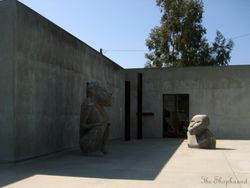 Plenty, aside from the fact that we were graciously welcomed into the store (are you listening Ron Herman?) and encouraged to peruse the place to our hearts content. Despite the shop's unmistakable California sense of style, there's lots there for any New Yorker to love, including lots and lots of black clothes. While the emphasis is on the progressive (Rick Owens, Balmain, Number (N)ine) there's enough Chanel to keep the slightly less adventurous quite happy. Of course, it's true that Maxfield is not for the limited of funds, but browsing is free and pretty easy.
Coming up: Silverlake and beyond.
Ron Herman at Fred Segal 8100 Melrose Avenue
Paul Smith 8221 Melrose Avenue
Ever  8251 Melrose Avenue
Maxfield 8825 Melrose Avenue, all in West Hollywood

Photograph by Kitra Cahana for The New York Times
Were The Shophound asked to handicap the race to be the permanent, new Critical Shopper for the Thursday Styles, we would have to put Mike Albo ahead of the pack (although we wouldn't mind seeing a few more entries from last weeks rookie, Cintra Wilson). Today Mike brings us avid readers to Kiosk, one of the most bizarre retail ventures we have come across in quite a while. In addition to his well-chosen subject matter, Mike is careful to expose a bit more of himself in his lead-in,

I AM not one of those people who has a constantly magical time when I travel. If I am outside the country and alone, whether it is Mexico City, Paris or Athens, I will trudge through museums and churches and go to a dumb discothèque, but spend most of my time trying to find toothpaste, and also staring at people, storefronts and logos that make no sense. Then I go back to my hotel, alone, and watch a dubbed cop film starring Billy Zane.

Well, this is just a bit sad. One would think Mike would be able to pick up somebody to watch his Billy Zane movie with, but, it's true, foreign lands can be intimidating. Of course, this could simply be a reflection of the current status of the American traveler in the eyes of the rest of the world. At any rate, we didn't dwell on it too much, because Kiosk was so intriguing we simply had to run down to Spring Street and check it out for ourselves.
The first task is finding the place. It is hidden past two dingy flights of stairs around the corner form a steamy kitchen, but once you find it, signs on the door enthusiastically encourage your entry. What we found inside was a strange cross between the Museum of Modern Art Design Store and a German Five and Dime store.

Employee Of The Week: Jesse Johnson at Flight 001

This week's Shop Clerk in New York Magazine is Jesse Johnson of Brooklyn's new Flight 001 store. Flight 001 has, for a while now, been the fun, campy alternative to your basic, jumbly Innovation Luggage shop. And we want you to know that we didn't cheat and went in person to the new location on Smith Street, just in case some of you were thinking we were a wee bit lazy last week. We have always enjoyed their "Airport '77" décor and they seem to have scoured the earth for the most amusing travel accessories and gadgets as well as all sorts of indestructible looking hard sided luggage. The Shophound particularly liked the Hideo Wakamatsu bags in camouflage pattern or, for the very daring, leopard. Jesse has all sorts of good advice and information in his interview, but as usual, those crafty editors at New York have saved the best for last.

What do you do for in-flight anxiety?
I take a Valium and do a shot at the bar. Klonopin works really well, too. I’ve made the mistake of taking it too early, passing out, and drooling all over myself while everyone else was boarding. So, twenty minutes before boarding is a good time to take it.

We don't know the reason for the rampant oversharing in this column, but the shop clerks are forever divulging all sorts of things better kept to themselves. Having said that, knowing when to take your Valium can be invaluable information, so thank you Jesse!

As an update for last week, we did receive a nice message from The World of Golf's Eric Bianchini, last week's clerk, who took his extra bit of attention with much better humor than some others have (you know who you are).

Clearly you are our ideal customer.  Someone that could certainly benefit from all the high tech new equipment that we have installed.  Give me an hour and I will have you hitting the ball straighter and impressing your friends with all your new golf knowledge; and at only $100 that is cheaper than an night on the town or about the same as dinner at Jerry's.

The Shophound thanks you for your kind invitation, Eric, although you may have overestimated our research budgets just a little, as well as how impressed our friends are by golf knowledge. We are press, after all, and have become accustomed to complimentary promotional materials. Should we ever reconsider our personal stance on the sport, however, you will be the first one we call.