Learn The Nuances Of Shuffleboard With Orley's Spring Collection Video 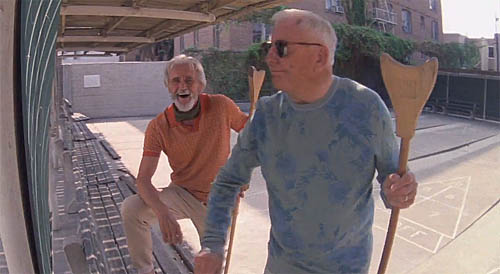 Governor Cuomo just signed new laws for New York State regarding the employment of minor-aged models, but that won't be much of a concern for ORLEY, the burgeoning knitwear brand that is launching its first full apparel collection with a video starring veteran actors Harwood Gordon and Bob Evans. As if to underscore the retirement-minded milieu of the video, Gordon and Evans demonstrate the ins and outs of competitive shuffleboard while modeling Orley's vibrantly colored Spring 2014 collection and looking rather a bit more stylish than your average retiree. Orley co-founders Alex Orley, Matthew Orley, and Samantha Florence enlisted the services of their younger brother Jason Orley to direct the short film which appears to be part of a series. Look for the collection next Spring at Bergdorf Goodman, Carson Street Clothiers and Fivestory, which should give you some time to practice your shuffleboard.

ORLEY (Official Site) Check out the video after the jump

Learn The Nuances Of Shuffleboard With Orley's Spring Collection Video" »