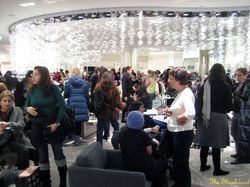 Perhaps it's in the spirit of our new president admitting the he "screwed up" with some of his cabinet appointments, or maybe not, but Saks Fifth Avenue's chief merchandising officer Ron Frasch, admitted that at least some of the early, deep markdowns the store took last fall were a bit deeper than necessary. "We didn't need to do what we did in accessories," he told The Wall Street Journal, and also indicated that shoes would probably have sold at less of a discount as well.
Well, that's something.
Saks royally pissed off most of the fashion industry last November with its drastic November sales that forced competitors to slash their prices in response, and, even worse, forced several well known and much loved independent boutiques out of business altogether. The Journal has an in depth look at the ramifications of these markdowns, including the possibility that some stores may make only parts of their collections available to department stores, reserving the rest for their own stores so they won't have to compete with reckless markdowns again. Apparently, many Saks execs wanted to hold the markdowns at 50%, but Frasch and chief executive Steve Sadove insisted on 70% practically across the board. Basically, Saks is on everyone's $#!‡ list.
Here are some quotes:

In the end, [Los Angeles boutique owner Tracey Ross] says, she had to discount so steeply that she couldn't pay her designers. "I am like, 'Do the math. I sold your $800 shoes for $50.' " She closed her store and filed for bankruptcy protection on Christmas Eve.
In New York, American designers started contacting [Diane] von Furstenberg, the head of their trade group [CFDA], looking for advice. "I was very upset. Everyone was," the designer says. That level of price-cutting "cannot happen again," she says.

Has Saks singlehandedly ruined full price selling? Time will tell, but as buyers go into market for the Fall collections, they will have a lot of fence mending to do with designers who will have to decide if they can afford to do business with a major store who has undercut their business with all their other accounts.
Saks Upends Luxury Market With Strategy to Slash Prices (The Wall Street Journal)

Is it Wall Street Journal week at The Shophound or just department store week at the Wall Street Journal? After last weekend's dissection of luxury stores, Monday's Journal assigned Ellen Byron to go in depth with Federated Department Stores Chairman and CEO Terry Lundgren who is the man charged overseeing with what will soon be a whopping 810 Macy's stores and 40 Bloomingdale's across the U.S. Of course, in Chicago, he will forever be known as the man who killed Marshall Field's. Byron gives us the expected bio and discusses Lundgren's plans for the future of Macy's, but what is most telling is her lead-in, which you will find after then jump.

This weekend, The Wall Street Journal decided to turn its analytical eyes to the world of luxury, and sent Vanessa O'Connell to take a big survey on the shopping habits of the aging and increasingly free-spending Generation X. (Ugh, are we aging?) Having spent nearly 15 years working in several of the stores she investigated, The Shophound had more than a passing interest in what O'Connell had to say, and we can sum up her premise by paraphrasing Woody Allen in "Annie Hall." Essentially, department stores are like sharks; either they move forward or they die. In her big graph chart comparing Barney's, Bergdorf Goodman, Neiman Marcus, Nordstrom and Saks Fifth Avenue, she got a lot of things right, but may have missed a few important points.
More after the jump